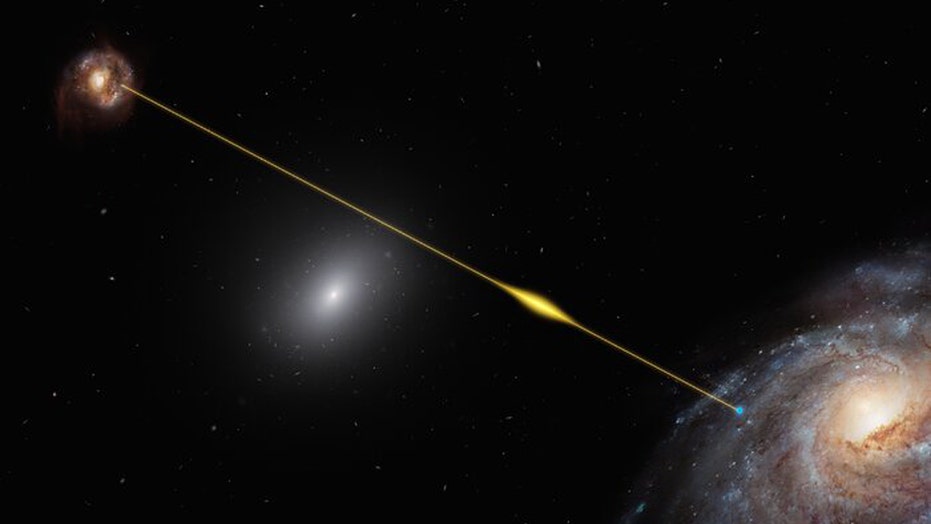 Fast radio bursts (FRBs) are often mysterious in their origins, but not an uncommon observation. A new study about an FRB discovered in November 2018 reveals more about it, as well as the massive galactic halo it traveled through.

The research, published in Science, notes that signal FRB 181112 has been further identified.

“The signal from the fast radio burst exposed the nature of the magnetic field around the galaxy and the structure of the halo gas. The study proves a new and transformative technique for exploring the nature of galaxy halos,” said the study's lead author, J. Xavier Prochaska, professor of astronomy and astrophysics at the University of California Santa Cruz, in a statement. ​

This artist’s impression represents the path of the fast radio burst FRB 181112 traveling from a distant host galaxy to reach the Earth. FRB 181112 was pinpointed by the Australian Square Kilometre Array Pathfinder radio telescope. Follow-up observations with ESO’s Very Large Telescope revealed that the radio pulses have passed through the halo of a massive galaxy on their way toward Earth. This finding allowed astronomers to analyze the radio signal for clues about the nature of the halo gas. (Credit: ESO/M. Kornmesser)

Prochaska and the other researchers used data from the Australian Square Kilometre Array Pathfinder radio telescope and the European Southern Observatory's (ESO) Very Large Telescope to make their observations.

"When we overlaid the radio and optical images, we could see straight away that the fast radio burst pierced the halo of this coincident foreground galaxy and, for the first time, we had a direct way of investigating the otherwise invisible matter surrounding this galaxy,” one of the study's co-authors, Cherie Day, added in the statement.

According to the ESO, a galactic halo has both dark and regular matter that's largely made up of hot, ionized gas.

"While the luminous part of a massive galaxy might be around 30,000 light-years across, its roughly spherical halo is ten times larger in diameter," the ESO wrote in the statement. "Halo gas fuels star formation as it falls toward the center of the galaxy, while other processes, such as supernova explosions, can eject material out of the star-forming regions and into the galactic halo."

The ESO added that astronomers want to research halo gas more to understand the ejection process that shuts down stars being formed.

“This galaxy’s halo is surprisingly tranquil,” Prochaska added. “The radio signal was largely unperturbed by the galaxy, which is in stark contrast to what previous models predict would have happened to the burst.”

More research is needed to determine whether the tranquil nature of the halo is common or if it's an exception to the rule. “This galaxy may be special,” Prochaska continued. “We will need to use fast radio bursts to study tens or hundreds of galaxies over a range of masses and ages to assess the full population.”

It's unknown how common FRBs actually are and most of their origins are mysterious.

Some researchers have speculated they stem from an extraterrestrial civilization, but others, including the Search for Extraterrestrial Intelligence Institute, or SETI, have said that explanation "really doesn't make sense." They come from all over space "and arranging cooperative alien behavior when even one-way communication takes many billions of years seems unlikely — to put it gently," SETI wrote in a September blog post.

First discovered in 2007, FRBs are relatively new to astronomers and their origins are mysterious. According to ScienceAlert, some of them can generate as much energy as 500 million suns in a few milliseconds.

In July 2018, an FRB that hit Earth was nearly 200 megahertz lower than any other radio burst ever detected.