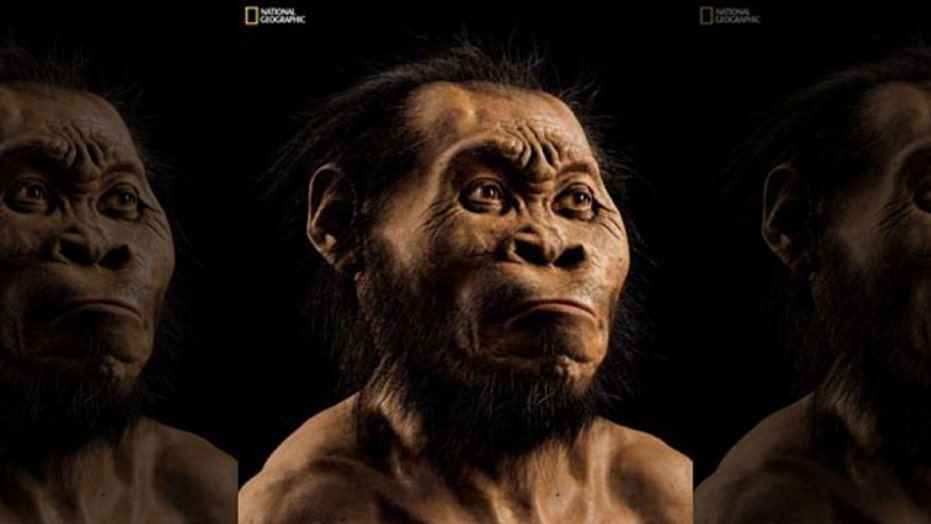 Fossils were found in cave in South Africa

JOHANNESBURG – Scientists in South Africa working at Moropeng, the site located just outside of Johannesburg and known as the "Cradle of Humankind," have discovered a mass underground grave containing the remains of hundreds of individuals from what they say is an entirely new species of the human family.

“I give you a new species of human - ‘homo naledi,’” said Professor Lee Berger, head of the paleontology team at University of the Witwatersrand in Johannesburg, and leader of the discovery team.

The species' brains were a third of the size of today’s humans but they stood like us, and had similar feet and hands, although their fingers were elegantly curved. This new species, Berger said, should be placed as an early humanoid just before the time of homo sapiens. The species could date back as far as 2.8 million years, according to experts.

"History books will have to be rewritten.”

South Africa’s deputy president Cyril Ramaphosa told Fox News Thursday that “history books will have to be rewritten” due to the discovery, which was made in a subterranean chamber by a team of 60 so-called "underground astronauts." The archaeologists have come across 1,500 fossils - entire families of hundreds of early humans.

The discovery of these fossils, believed by scientists to possibly be the largest group of individuals in fossil form ever found in one place anywhere in the world, was made in 2013. When the team of ‘astronauts’ was put together, only small - and thin - scientists were encouraged to apply. Archaeologists had to squeeze through a 10- inch wide gap between underground rocks - dubbed “Superman’s Crawl,” and go through a succession of caves, before finally making a vertical 10-yard drop to get into the now-named Dinaledi Chamber. At the entrance, they found 300 fossils, and in the chamber itself some 1,200 fossilized bones. After two years of keeping the discovery secret, the search is ongoing.

"There are hundreds more fossils probably to be found,” said Berger.

This photo provided by National Geographic from their October 2015 issue shows a composite skeleton of Homo naledi surrounded by some of the hundreds of other fossil elements recovered from the Rising Star cave in South Africa. (Robert Clark/National Geographic, Lee Berger/University of the Witwatersrand via AP)

A National Geographic staffer said the magazine was first alerted to the discovery in the U.S. by a late night phone call from Berger.

“On the normally excitable scale of Professor Berger of 1 to 10, this was an 11,” the staffer said.

Password-protected live video feeds of the fossil recovery were beamed from the cave to scientists throughout the globe. Access to the cave was so difficult, and the fossils so delicate, that amateur climbers were brought in to help. Once on the surface, a team of 30 scientists from around the world was assembled to examine the fossils. Among them were specialists in new hi-tech analysis techniques.

The fossils will be on view to the public at Maropeng for one month, beginning Sept. 11, before more work on them is undertaken.

"Research on these finds will continue for decades to come," Berger said. "This is an entire anatomy of a new species that connects to early members of our genus.”

Most of the fossils were found in a 30-square-foot section of the Dinaledi Chamber. Berger's team does not believe it was the result of a catastrophe, and officials do not believe the individuals lived in the cave or even together.

“This is a new species of human that deliberately disposed of bodies in this chamber,” Berger said, adding that the bodies appear to have been dropped from above down a chute formed by rocks which forms the entrance to the chamber. Up until now, Berger adds, it was thought that homo sapiens were the first beings to choose to dispose of their dead.

"Now, with Homo Naledi, we have evidence of the world’s first burial site," he said.

Not everybody agreed that the discovery revealed a new species. Tim White of the University of California, Berkeley, told The Associated Press the claim is questionable.

"From what is presented here, (the fossils) belong to a primitive Homo erectus, a species named in the 1800s," he said.

Paul Tilsley is a Fox News freelance reporter/producer based in Johannesburg, South Africa. Follow his African stories on Twitter on @paultilsley