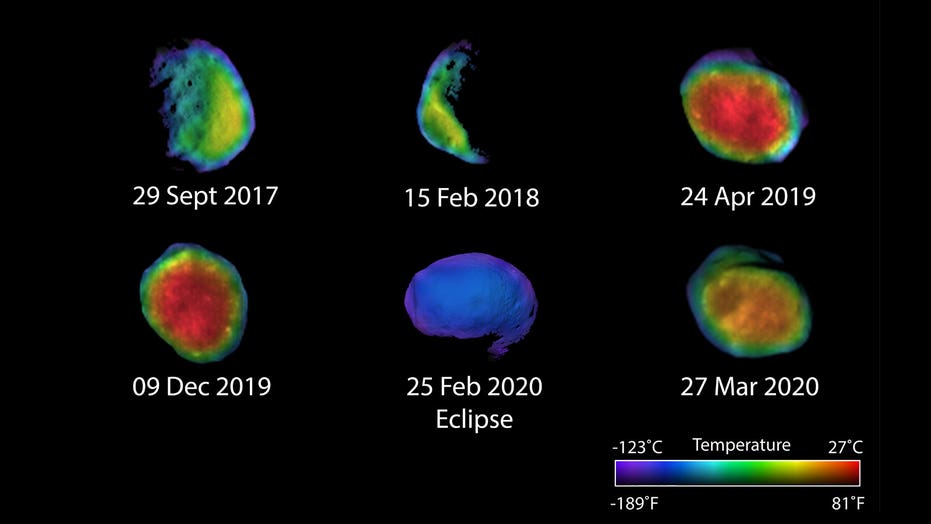 There are more than 200 moons in the Solar System, including Phobos and Deimos, which orbit Mars. NASA's Odyssey orbiter has snapped new pictures of Phobos, giving new insight into the celestial satellite.

In a blog post, NASA JPL notes Odyssey took three new views of the 16-mile wide Phobos this past winter and spring. The new pictures show that heat distribution across the moon's surface varies in different conditions, which could give researchers new insight into what comprises Phobos.

"We're seeing that the surface of Phobos is relatively uniform and made up of very fine-grained materials," said Christopher Edwards of Northern Arizona University, who is leading the processing and analysis of the Phobos images, in a statement. "These observations are also helping to characterize the composition of Phobos. Future observations will provide a more complete picture of the temperature extremes on the moon's surface."

Six views of the Martian moon Phobos captured by NASA's Odyssey orbiter as of March 2020. The orbiter's THEMIS camera is used to measure temperature variations that suggest what kind of material the moon is made of. (Credit: NASA/JPL-Caltech/ASU/NAU)

MARS MAY HAVE BEEN A RINGED PLANET IN ITS ANCIENT PAST, STUDY SUGGESTS

The images were taken using the orbiter's Thermal Emission Imaging System (THEMIS) camera, which is capable of measuring temperature.

Mars' moons have been of interest to researchers in recent memory. A study published earlier this month suggested that Mars may have also once been a ringed planet.

The researchers pointed out that one of Mars' moons, Deimos, has a slightly altered orbit that suggests there was something responsible for its slight tilt.

Researchers are learning more about Mars' ancient past. A study published in March suggested the Red Planet had two unique reservoirs of ancient water that once flowed deep beneath the planet's surface.