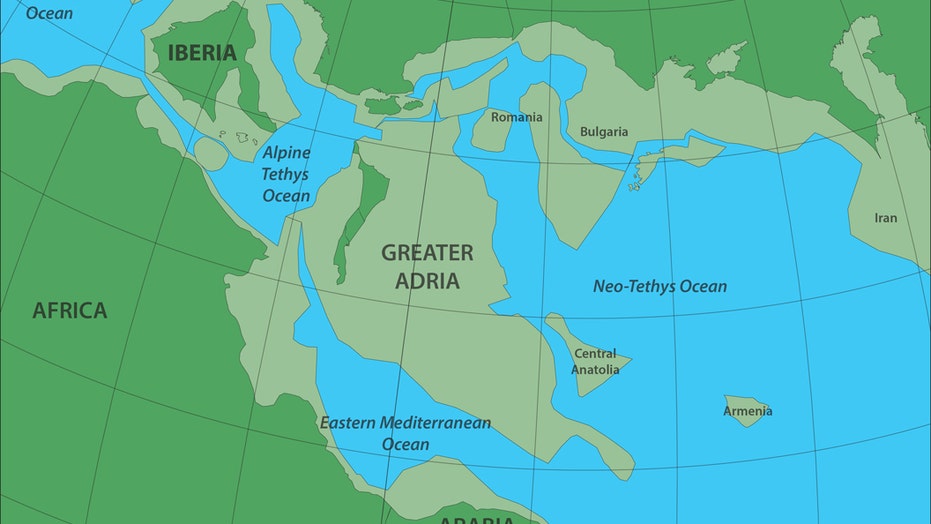 Following news that underground continents were discovered hundreds of miles below the Earth's crust earlier this month, a group of researchers has also uncovered a long-lost continent in the Mediterranean.

The research, published in Gondwana Research, notes that the continent was part of North Africa and eventually settled under Southern Europe more than 200 million years ago. It has been given the name "Greater Adria," after the Adria region, which stretches from Turin to the Adriatic Sea.

"It is quite simply a geological mess: everything is curved, broken, and stacked," Utrecht professor Douwe van Hinsbergen said in a statement. "Compared to this, the Himalayas, for example, represent a rather simple system. There you can follow several large fault lines across a distance of more than 2000 km."

MYSTERIOUS UNDERGROUND CONTINENTS MAY BE AS OLD AS EARTH

The vast majority of Greater Adria is underwater, but there are still parts that are visible, researchers noted.

"The only remaining part of this continent is a strip that runs from Turin via the Adriatic Sea to the heel of the boot that forms Italy," van Hinsbergen added.

Van Hinsbergen and the team of researchers were able to recreate the continent using GPlates plate reconstruction software, factoring in "thousands of pieces of information" from a variety of inputs, including fault lines and magnetism stored in rocks to come up with the final image of the continent.

Among the "most complex" geological regions on Earth, Europe consists of seven regions, made up of 44 countries, which van Hinsbergen said hindered the eventual discovery of the lost continent.

"This is not only a large region, but it also hosts more than 30 countries," the researcher continued. "Each of these has its own geological survey, own maps, and own ideas about the evolutionary history. Research often stops at the national borders. Therefore, the region is not just fragmented from a geological perspective."

Earlier this month, researchers discovered gigantic regions of rocks as large as continents exist hundreds of miles below the Earth's crust. The findings, published in the Journal Geochemistry, Geophysics, Geosystems, suggest these large rock regions have existed for some 4.5 billion years.