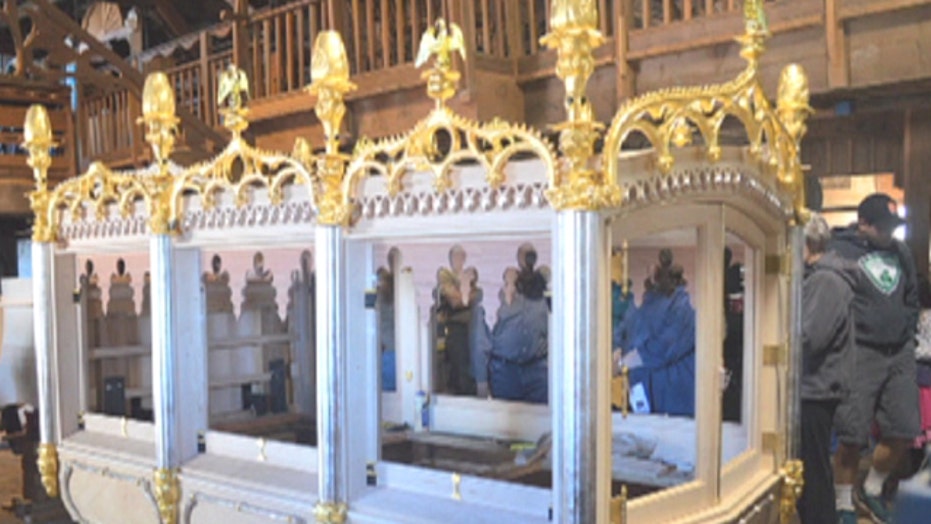 Former soldiers from around the country are working on a recreation of President Lincoln's funeral hearse, nearly 130 years after it was destroyed in a fire.

The project is a labor of love for veterans, who have done their part and passed it along to the next soldier-turned-craftsman in preparation for the 150th anniversary of Honest Abe's funeral. Recently, the death carriage was in Eureka, Calif., at the Blue Ox Millwork's School for Veterans, a nonprofit teaches craftsmanship skills to returning soldiers.

At Blue Ox, Vietnam veteran and millworks owner Eric Hollenbeck led a team of nine Afghanistan and Iraq vets in their effort to help restore the vehicle that carried the body of Lincoln. The idea is not just to rebuild the hearse, but to help veterans bond and re-integrate into society.

"The biggest thing that this hearse project is giving the veterans is a sense of self-identity, a returning combat veteran has to find a new civilian identity. And these guys and gals did that," Hollenbeck told Fox News.

Hollenbeck says the process of completing a project helps bring focus and therapy to the team, while also giving them skills that can help them find jobs.

"Working with your hands is one healing aspect of the project," said Hollenbeck.

The hearse's next stop is Tombstone, Arizona, where Vietnam veteran Jack Feather and his team will finish the job. Completing Lincoln's lavish, ostrich feather-adorned hearse has been a difficult process. The original was destroyed in a stable fire in 1887. The team has only one picture of Lincoln's hearse to work from, and most of the components used just aren't around anymore.

"Finding out what goes into this thing has been a challenge," said Feather, "Just figuring out the dimensions- that took months. I went everywhere trying to find someone who would build a 16-spoke rear wheel. They said they didn't exist."

They eventually found wheel craftsman Jay Jones, a Kentucky resident and Vietnam veteran, who built them from scratch.

Project coordinator P.J. Staab said they didn't set out to make this an 'all-veterans' project when they got the hearse request from the Lincoln Funeral Coalition. But that's exactly what it became.

"This thing started to take a shape all by itself, without any prompting from anyone," said Staab.

Feather estimates the total cost of materials needed for the project will come to $40,000. The Staab Family of Staab Funeral Homes covers those costs, but the vets give their labor free of charge.

The hearse will be the centerpiece of a May 1-3 funeral reenactment in Springfield, Illinois. More than 250,000 people are expected to attend.