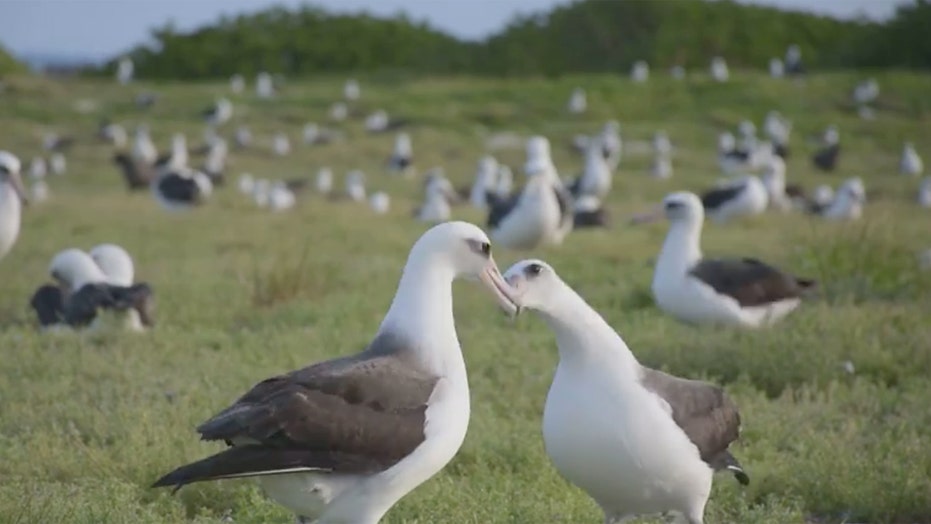 The U.S. Fish and Wildlife Service shared a video of a pair of Laysan albatrosses taking part in a “courtship dance” at the Midway Atoll National Wildlife Refuge to celebrate International Dance Day on Wednesday.

“Looking for some new moves? Take notes on this gooney couple’s courtship dance,” the Wildlife Service’s Pacific Islands branch posted on Facebook alongside the video.

About 1 million of the birds mate and nest on the island every fall, according to the post.

The video shows two of the birds bobbing together, nudging their beaks against one another and chirping as a number of fellow Laysans sing and sit in a grassy field.

Wildlife authorities say the Laysan albatrosses are a monogamous species that typically lay eggs in mid-November and feed their chicks until the early summer.

The dances occur when young adult birds return to their home nesting colony to search for a mate after spending their first three to five years at sea. They typically live between 12 and 40 years.

Midway Atoll is home to more than 70 percent of the world’s Laysan albatross population, according to wildlife officials.

The birds feed on surface fish, squid and other prey -- but have also reportedly swooped down and consumed tons of plastic as a species each year due to pollution of the oceans.

The Midway Atoll is also home to a pair of endangered short-tailed albatross -- once considered extinct -- that were spotted with a new chick by Wildlife Service researchers last year.