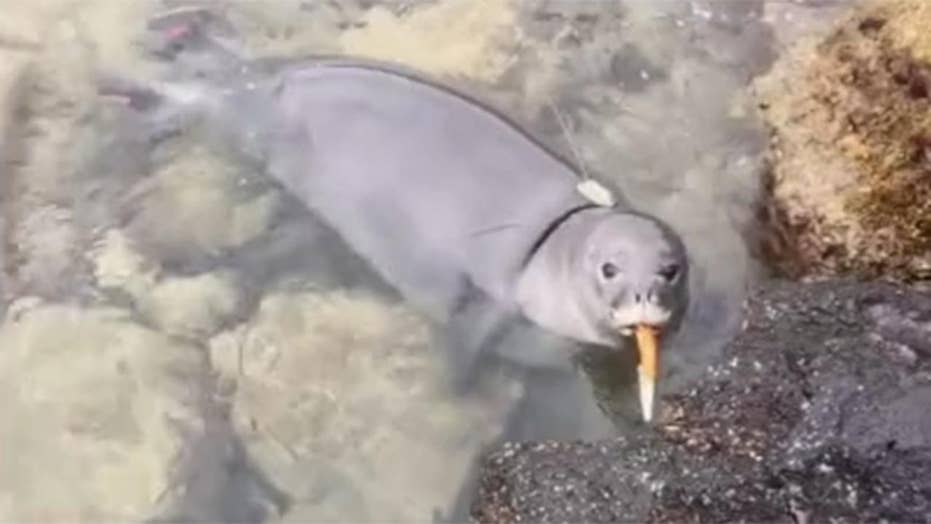 At first glance it may look like this monk seal pup is holding a large carrot in its mouth, but it's actually the handle of a knife the sea creature picked up off a beach in Hawaii — and it could have killed the creature.

The seal pup, named Manu‘iwa, was recently weaned from its mother and is being closely monitored by officers from the Marine Mammal Center and the DLNR Division of Conservation and Resources Enforcement (DOCARE) in Kalaoa. They watched as the playful seal pup dove under water Sunday and popped back up with a mysterious object in its mouth.

“There was real concern that the seal pup might swallow the knife. It’s a reminder to all of us to properly dispose of our trash and not to leave it on Hawai‘i’s beaches or in the ocean," a DOCARE officer who captured the disturbing scene on camera said in a statement released by the Hawaii Department of Land and Natural Resources (DLNR).

Some people poked fun at the minute-long footage shared on Hawaii DLNR's Facebook page on Tuesday.

A monk seal pup was spotted with a knife in its mouth on a beach in Hawaii on April 15, 2018. (Hawaii Department of Land and Natural Resources)

"Is this the new Navy Seal training?" one Facebook user asked.

"I said, gimme your wallet. Now!" another joked.

"Don’t deny that pup their sashimi! Where’s the shoyu? Where’s the wasabi!" one man quipped.

"Is this the new Navy Seal training?"

But Hawaii DLNR said this is no laughing matter — it's an example of a serious problem plaguing the world's oceans right now: pollution.

"Too easy to make jokes about 'Good marine life going bad,'" the organization commented. "But this is a serious illustration of why [we need] beach cleanups and other efforts to keep plastic debris out of our oceans and rivers."

Several monk seals and sea lions have required surgeries over the years for ingesting items that don't belong in the ocean, mainly fishing gear — from fishing nets to crab traps, Hawaii DLNR explained. This is the first situation officials can recall involving a knife, which is even more deadly.

"Once lodged inside them, the animal has no way to get the painful obstruction out," the organization added. "[It's] all non-biodegradable and made of material that doesn't expand as the animal grows. Instead it cuts deeper into their body."

It's crucial for seal pups to avoid human interaction so they can better adjust to the wild, Hawaii DLNR says. Anyone who sees a monk seal should report the sighting to your local marine mammal response coordinator, NOAA’s Office of National Marine Fisheries requests.