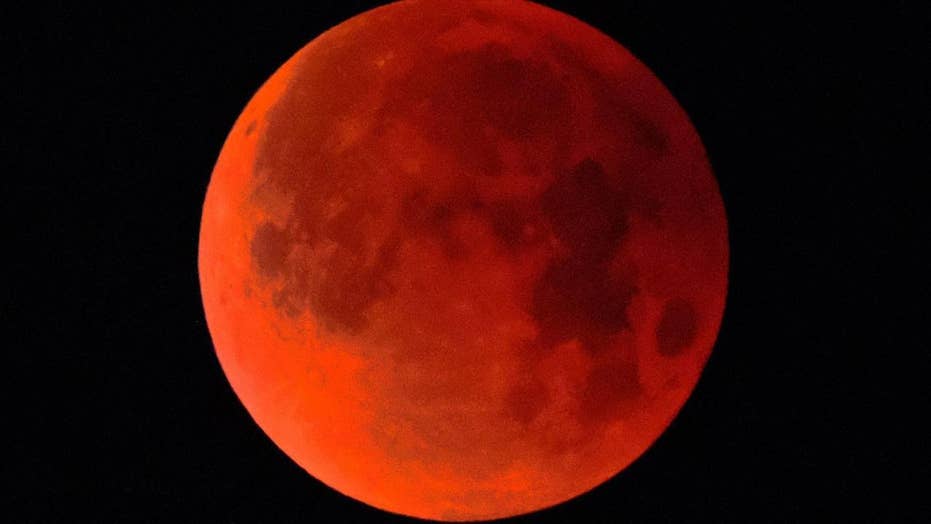 Super Wolf Blood Moon Eclipse: How and where to see it

January's 'super blood Moon' eclipse will be visible to millions of people across the globe. See where and how to watch the rare event.

Millions of people across the world will witness a partially red-tinted night sky as a rare celestial event arrives this weekend: a "super wolf blood Moon" eclipse.

North America hasn't had a decent view of this special scene in at least three years and another total lunar eclipse — which occurs when the entire Moon enters Earth’s shadow — isn't expected to happen again until 2021, NASA predicts.

RARE 'SUPER BLOOD MOON' ECLIPSE TO PUT ON STUNNING DISPLAY IN JANUARY: WHAT TO KNOW

“The Moon won't be completely invisible during the period of totality when the Earth's shadow completely covers it! A little bit of sunlight is refracted by the Earth's atmosphere and reaches the Moon, bending around the edges of the Earth. This small amount of red light still illuminates the Moon enough for us to see it. Instead of being bright and white, the Moon will be very dim and red, ten thousand or so times dimmer than usual; people call this a ‘blood Moon,'" Freeman explained.

"Instead of being bright and white, the Moon will be very dim and red, ten thousand or so times dimmer than usual..."

Here's what you need to know ahead of the big lunar phenomenon.

Who will be "front row center"?

North and South America and portions of western Europe and Africa will be able to see the rusty-colored Moon overnight from Jan. 20 to Jan. 21. Central and eastern Africa and Asia will only be able to see a partial eclipse of the Moon during this time, according to Time and Date.

The U.S. East Coast will definitely have the "best seats" when it comes to viewing the upcoming super blood Moon eclipse. In this part of the country, the Moon is expected to "climb to extraordinary heights," Space.com says.

According to the space sight, the Moon will rise even higher in the south, particularly around Orlando and Miami. And in a portion of Cuba, it will be "directly overhead," according to Space.com.

Unlike solar eclipses, which require special equipment to view the astrological event, you don't need anything to spot this celestial event.

Simply make sure you're at a dark spot and possibly pack some binoculars if you really want a clearer picture. Also, remember to give yourself some extra time before the eclipse is slated to take place. It takes about 20 minutes for your eyes to adjust to the darkness.

"We can get really good science out of what happens to the surface of the moon during total lunar eclipses but again, the cool thing is that the moon changes color," Noah Petro, a research scientist at the Goddard Space Flight Center in Maryland, previously told Space.com. "It's something fun to see — it's benign, but it's a change. And anytime we see change in the skies it's always kind of exciting."

However, it is possible bad weather could impact your view.

Forecasters are warning of a new, gathering system that could soon bring a wintry mess to the Northeast.

That activity out west will then set the pattern for a potential return of wintery precipitation across the Midwest — and into parts of the Northeast that have been spared snow so far this year, Dean warned.