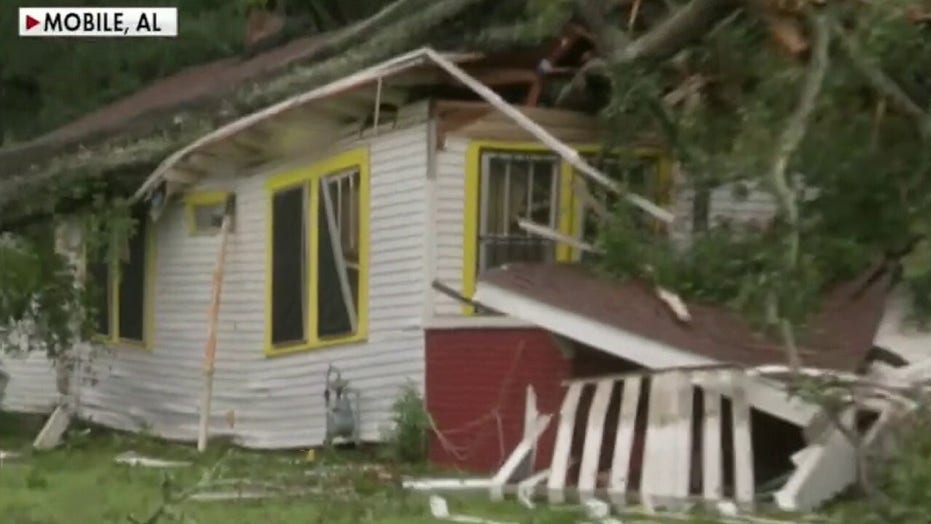 Alabama resident, Tina Bennett, captured video of a giant alligator swimming in the water just outside of her Gulf Shores home on Wednesday.

"Oh my god, this is outside of our window!" Bennett exclaimed in a video posted on Twitter by WKRG-TV meteorologist Thomas Geboy. "It is a 10 or 12-foot alligator!"

Geboy noted that the massive reptile was another reason to shelter in place until floodwaters recede.

"Not only are there downed power lines, but there’s also displaced wildlife," he wrote.

In addition to the gator, an eel was also captured swimming on the side of a highway in Orange Beach, Ala., later in the day, according to Birmingham's WVTM-TV reporter, Brittany Decker.

"Just a typical Wednesday in 2020," the station wrote.

Sally made landfall at 4:45 a.m. CDT near Gulf Shores as a Category 2 storm with maximum sustained winds of 105 mph, according to the National Hurricane Center (NHC).

Sally brought rain measured in feet, killed at least one person, and forced the rescue of hundreds. At least eight waterways in south Alabama and the Florida Panhandle were expected to hit major flood levels by Thursday.

An alligator (not the one in Alabama) is seen on Tuesday, Sept. 15, 2020, in Moss Point, Miss. As Hurricane Sally's outer bands reached the U.S.  (AP Photo/Stacey Plaisance)

The National Weather Service warned that some of the crests could break records, submerge bridges and flood homes.

In Orange Beach, at least 50 people were rescued from flooded homes and taken to shelters, Mayor Tony Kennon said.

“We got a few people that we just haven’t been able to get to because the water is so high,” Kennon said. “But they are safe in their homes. As soon as the water recedes, we will rescue them.”

Alabama is home to 93 indigenous reptiles species, including 12 lizards, 49 snakes 31 turtles, and the American alligator, according to the Alabama Department of Conservation and Natural Resources.