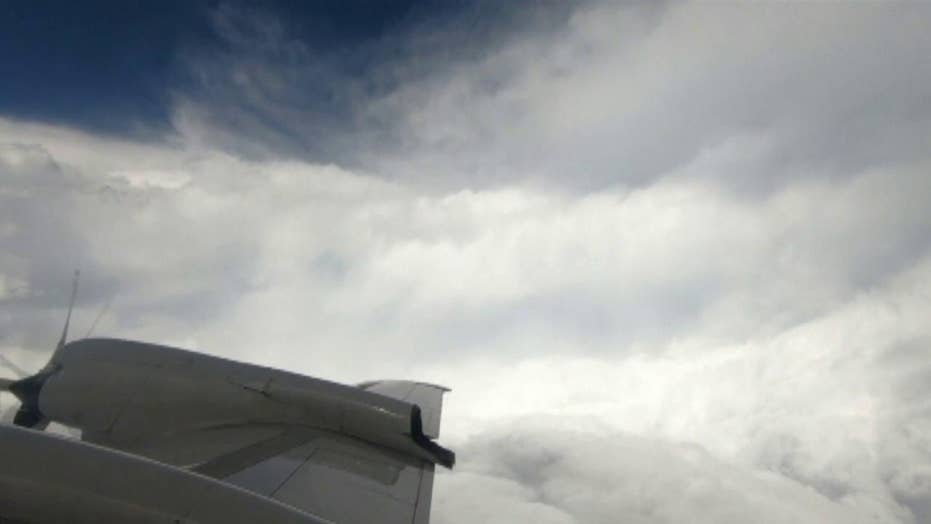 Raw video: A National Oceanic and Atmospheric Administration Lockheed WP-3D Orion flies through Hurricane Florence as it churns toward the Carolinas.

Hurricane Harvey, which dumped 40 inches of rain when it made landfall in 2017, could unfortunately be in for some competition if Hurricane Florence behaves similarly.

Harvey stalled over southern Texas and dropped a record-shattering amount of rain, up to 60 inches in some communities, which inundated hundreds of thousands of homes and displaced over 30,000 people.

Now, forecasting models are showing that Florence could stall over the Carolinas due to a “blocked pattern” over the northeastern U.S. and eastern Canada that won’t allow the storm to be absorbed into the higher altitudes.

Michael Ventrice, a meteorological scientist at The Weather Company, told Fox News that he’s seeing rainfall predictions of 20 inches or more across North Carolina if Florence were to stall over the region.

WHY IS HURRICANE FLORENCE SO INTENSE THIS FAR NORTH?

States of emergency have already been declared by Washington, D.C., Mayor Muriel Bowser for the nation's capital; requested by Virginia's governor; and approved by President Donald Trump for North and South Carolina on Monday.

“I'm not sure it's fair to say this will be worse than Harvey, but there are definitely similarities in the model guidance,” Ventrice added. “This could yield catastrophic flooding for the Carolinas if correct.”

If you're getting ready for Florence, you can read about steps to prepare for the storm here.