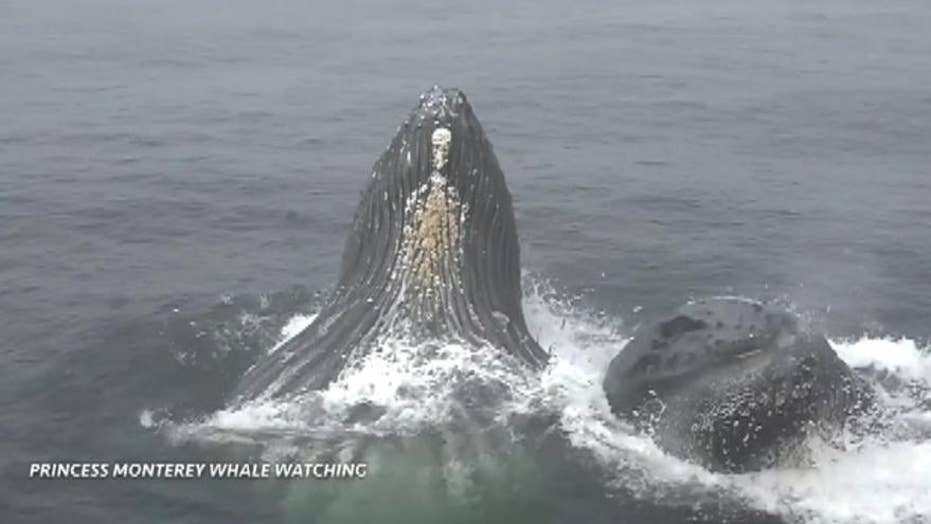 Humpback whales leap out of water near whale watching boat

Humpback whales leap out of water to feed on anchovies alongside whale watching boat.

A pair of humpback whales put on a jaw-dropping display as they lunged for food right in front of a California tour boat in Monterey Bay last week. Whale watchers whipped out their smartphones to capture video of the incredible display, which some called "thrilling."

The humpback whales, which were feeding on anchovies at the time, leaped out of the water "very close to the boat," tour agency Princess Monterey Whale Watching described in a Facebook post. According to SFGate, the whales were within "arm's reach" of the boat — one even briefly grazed its side.

"Often it happens underwater so we don't even get to see it," Randy Straka, a photographer with the tour company, told the news site. "We don't see that very often at all actually."

Humpback whales are a protected species in the U.S. They can weigh up to 40 tons and grow 60 feet long, according to the National Oceanic and Atmospheric Administration (NOAA). The "big-winged" whales are a popular kind for whale watchers, as they are often very active, especially in the summer months as they store up blubber for the winter.

"They are often surface active, jumping out of the water and slapping the surface with their pectoral fins or tails," the NOAA said.

The large whales feed on various types of small fish and shrimp-like krill, which they trap at the surface.

Whale breaches off the coast of Long Branch, NJ

Raw slow motion video of whale leaping from the water.

"Once the fish are corralled and pushed toward the surface, the whales lunge upward through the bubble net with open mouths engulfing their prey," the NOAA explained. "Different groups of humpback whales use other bubble structures in similar ways, though, there appears to be regional 'specializations' in bubble-feeding behavior among populations."

It's a beautiful sight — especially when you're up close.

A video of the Princess Monterey Whale Watching group's recent excursion was posted online July 13 and has already been viewed more than 5,000 times. Dozens of people commented on the wild scene.

"Oh my gosh, so close to the boat. My heart would have stopped or at least skipped a beat," one Facebook user wrote.

"It seems like they enjoy putting on a show!" another exclaimed.

"So close - is there risk of injuring them?" one user asked.

"The boats engines are in neutral and drifting when the whales approach that closely. They are very aware of their surroundings and know the boat is there so they are fine," Princess Monterey Whale Watching explained, adding that they wait for the whales to move a safe distance away before starting the engine again.