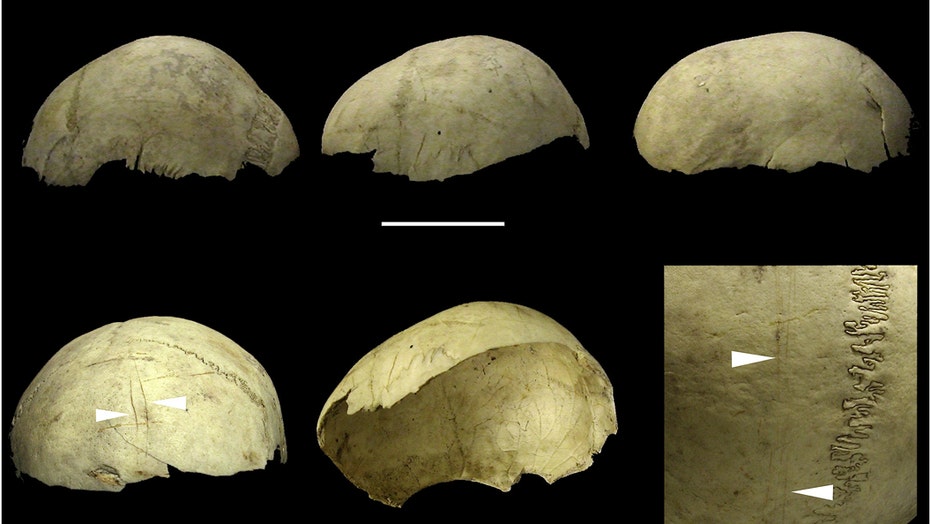 Human skulls were used as recently as the Bronze Age to make pots and drinking cups, startling new research shows.

The study notes that the skulls were cleaned and then fashioned into drinkware, complete with decorations and war trophies. It's unknown whether they were actually used, but researchers believe there may have been a need to extract the brain for nutritional purposes.

“The ritual use of human skulls has been documented in several archaeological sites of different chronologies and geographical areas," the study's lead author, Francesc Marginedas, told British news agency SWNS. “This practice could be related to decapitations for obtaining war trophies, to the production of masks, as decorative elements, even with engravings, or to what is known as skull cups."

Human skulls were systematically manufactured as recently as the Bronze Age to make pots and drinking cups, new research shows. Meticulous extraction of the scalp and flesh was used to clean the skulls and turn them into bowls, personalised decorations and war trophies as recently as 4,000 years ago. (Credit: SWNS)

“In fact, some ancient societies considered that human skulls possessed powers or life force, justifying sometimes its collection as evidences of superiority and authority during violent confrontations," Marginedas added.

The discoveries were made in several European sites, including in Gough’s Cave, Fontbrégoua, Herxheim, and El Mirador Cave.

It's unclear if the skulls, which were broken to preserve the thickest part, were used, but it's possible it was linked to cannibalism.

"The removal of the scalp and defleshing was meticulous and intensive according to the number of cut marks, in all skull cups and Fontbrégoua," the authors wrote in the study's abstract. "This pattern is repeated from the Magdalenian sites of Gough’s Cave to the Bronze Age site of El Mirador Cave, providing further evidence of the preparation of the skulls for their possible ritualization. Intensive tissue removal can be an indicator of human cannibalism in a ritual context."

The researchers were able to discover the potential ceremonial practices by looking at the cut marks on the skull, which were likely made by stone tools or metal knives.

“This practice is archeologically well documented among American Paleo-Indians, for example, who show circular arrangements around the head as signs of this type of practices," Marginedas said.

The research was published in the Journal of Archaeological Science in October 2019.