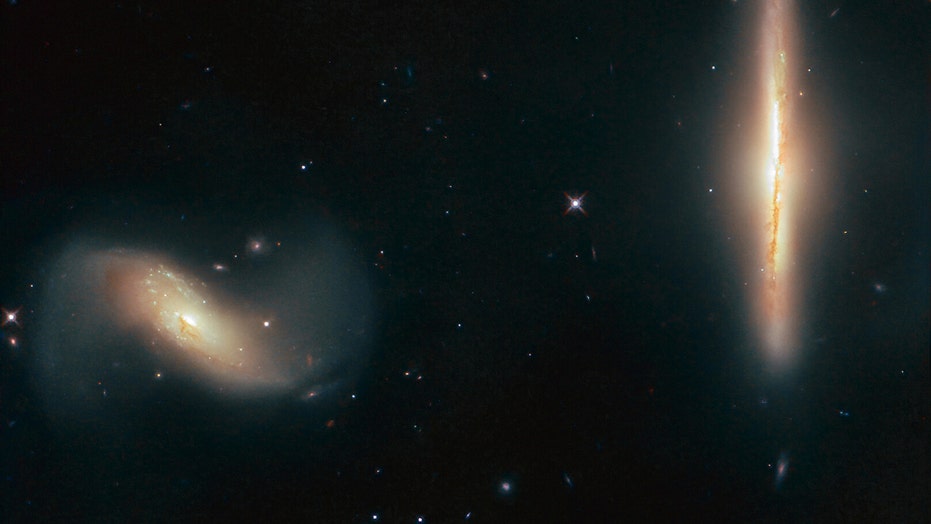 Holy heavens, Batman. It's a "galactic dynamic duo" in space.

NASA's Hubble Space Telescope has spotted a pair of galaxies, collectively known as Arp 293, having come so close together that they share cosmic material.

"Together, the duo [NGC 6285, on the left and NGC 6286, on the right] is named Arp 293 and they are interacting, their mutual gravitational attraction pulling wisps of gas and streams of dust from them, distorting their shapes, and gently smudging and blurring their appearances on the sky — to Earth-based observers, at least," NASA wrote in a statement on its website.

Some galaxies are closer friends than others. While many live their own solitary lives, others stray a little too close to a near neighbor and take their relationship to the next level. The galaxy in this picture, NGC 6286, has done just that, and is shown here with its partner, NGC 6285. (ESA/Hubble &amp; NASA, K. Larson et al.)

The bluish haze seen in the image is some of the material that is being shared by both galaxies, including clouds of dust and gasses that are distorting their shapes and blurring their appearances, NASA added.

Arp 293 is 250 million light-years from Earth and is in the Draco constellation. A light-year, which measures distance in space, equals 6 trillion miles.

This "dynamic duo," as NASA has described them, is just the latest in a pair of galaxies that have been observed interacting by Hubble. Last month, NASA posted a picture of dueling galaxies described as a "titanic battle."