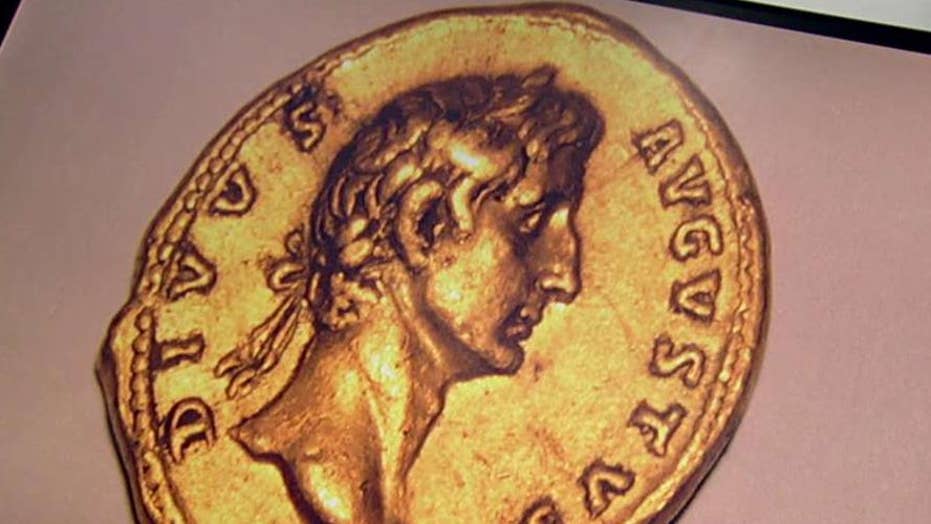 Hiker finds one of the rarest coins in existence

A hiker in Israel has found a rare, 2,000-year-old coin bearing the image of Emperor Augustus that is identical to one in the British Museum's collection

Laurie Rimon was hiking with friends at an archeological site in the eastern Galilee when she saw a shiny object in the grass. After realizing it was a coin, the group’s guide, Irit Zuk-Kovacsi contacted the Israel Antiquities Authority. Within hours, an IAA representative joined the group of hikers in the field and took possession of it.

“It was not easy parting with the coin,” Rimon said in a statement. “After all, it is not every day one discovers such an amazing object, but I hope I will see it displayed in a museum in the near future."

It was quickly determined this was not just any coin. It dates to 107 AD and was part of a series of nostalgic coins that Emperor Trajan minted and dedicated to the Roman emperors that ruled before him. The only other coin of this kind is believed to be the one held by the British Museum.

Laurie Rimon with the coin. (Samuel Magal, courtesy of the Israel Antiquities Authority)

Two other gold coins of this emperor have been registered in the State Treasures, one from Giv‘at Shaul near Jerusalem, and the other from the Qiryat Gat region, Donald T. Ariel, head curator of the coin department at the Israel Antiquities Authority, said in a statement. But the details on both are different to those that appear on the coin found by Rimon.

“This is an extraordinarily remarkable and surprising discovery. I believe that soon, thanks to Laurie, the public will be able to enjoy this rare find,” Nir Distelfeld, an inspector with the IAA Unit for the Prevention of Antiquities Robbery, said in a statement.

Danny Syon, a senior numismatist at the Israel Antiquities Authority, said one side of the coin shows symbols the Roman legions next to the name of the ruler Trajan. On the other side, there is a portrait of the emperor Augustus Deified.

A coin like this could illustrate the Roman army was in the region as far back as 2,000 years ago, “possibly in the context of activity against Bar Kokhba supporters in the Galilee – but it is very difficult to determine that on the basis of a single coin,” Ariel said.

“Historical sources describing the period note that some Roman soldiers were paid a high salary of three gold coins, the equivalent of 75 silver coins, each payday,” Ariel said. “Because of their high monetary value soldiers were unable to purchase goods in the market with gold coins, as the merchants could not provide change for them”. Dr. Ariel added, “Whilst the bronze and silver coins of Emperor Trajan are common in the country, his gold coins are extremely rare.”