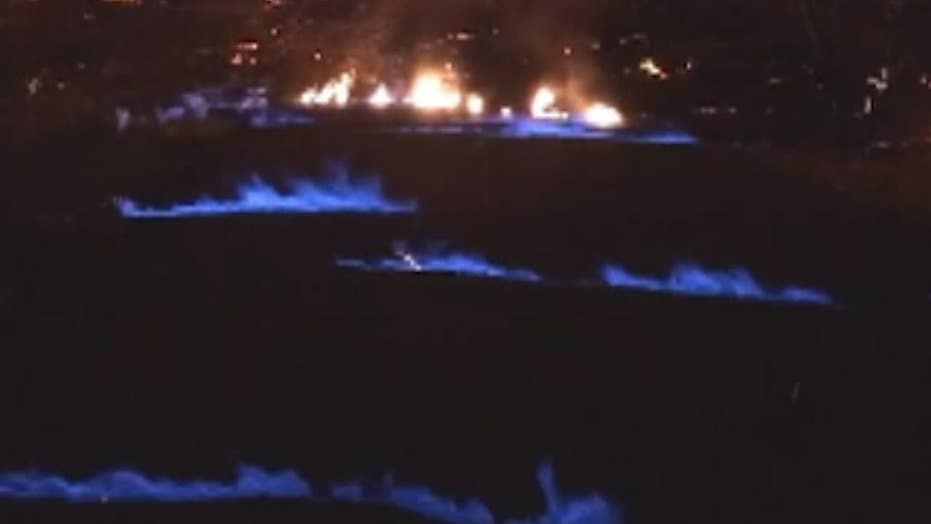 The U.S. Geological Survey has posted footage of the strange blue burning flames on its Facebook and Twitter accounts. Caused by methane gas, the flames were observed on cracks in a street in Hawaii’s Leilani Estates Subdivision on May 22.

“When hot lava buries plants and shrubs, methane gas is produced as a byproduct of burning vegetation,” explains the USGS, in the post. “Methane gas can seep into subsurface voids and explode when heated, or as shown in this video, emerge from cracks in the ground several feet away from the lava. When ignited, the methane produces a blue flame.”

Intermittent short bursts of methane are visible in the video, as is “lava fountaining,” which occurs when a jet of lava is sprayed into the air by the rapid formation and expansion of gas bubbles in molten rock.

Kilauea began spewing lava on May 3. The volcano, one of the most active in the world, has already destroyed dozens of homes. President Trump declared a major disaster area in Hawaii on May 11.

Lava from the volcano has also been spewing a deadly plume containing tiny particles of volcanic glass.

Known as “laze” – a combination of the words “lava” and “haze,” the plume occurs when molten lava flows into the ocean. “It reacts vigorously with sea water to create a different type of gas plume that results in hazy and noxious conditions downwind of an ocean entry,” explained the Hawaiian Volcano Observatory, in a statement.

More than 20 fissures have opened since the Kilauea volcano started erupting. On Wednesday, the Hawaiian Volcano Observatory reported that lava flows from fissures 5 and 13 are feeding a flow that looks like it will enter the Pacific Ocean adjacent to an existing ocean entry point for lava.

The Observatory also reported a small explosion from Kilauea’s overlook crater at 6:44 p.m. local time Wednesday (12:44 a.m. EDT Thursday). The explosion produced an ash cloud that reached about 7,000 feet above sea level, according to National Weather Service radar. “The cloud did not contain much ash and cleared quickly,” explained the Hawaiian Volcano Observatory.

Underscoring the eruption's dangers, a Hawaii man was hit by a flying piece of lava over the weekend and said the molten rock nearly sheared his leg in half.