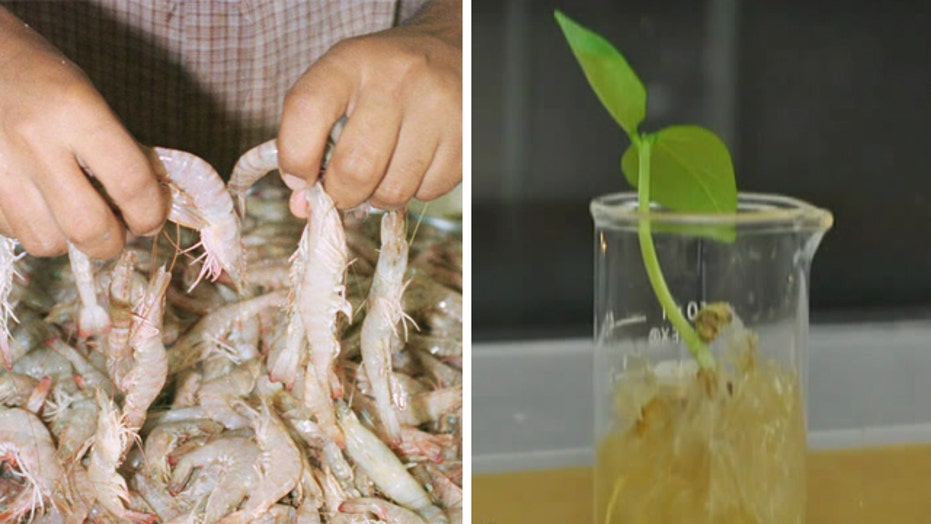 In their search for sustainable materials that can be mass produced, researchers at Harvard's Wyss Institute for Biologically Inspired Engineering turned to an unexpected source: shrimp.

The team developed a bioplastic from chitosan, a form of chitin, which the second most abundant organic material on Earth. The majority of available chitin in the world comes from discarded shrimp shells. Wyss Institute Postdoctoral Fellow Javier Fernández, Ph.D., spoke to FoxNews.com about his lab's work.

"We focus in chitin, which is one of the components in shrimp shells," Fernández said. "Chitin is not only in the shrimp shells, it is the second most abundant polymer on Earth, so it's basically everywhere."

Most chitin is either thrown away or used in things like fertilizer or cosmetics. It is considered a very strong molecule in nature, Fernández says.

"You have like all these components out there that we are not using, that we are basically treating as waste, while nature is able to use them in really strong and tough structures," Fernández said.

The lab has developed a way to process the material so that it can be used to create large, 3D objects. So far, the lab has made smaller objects, such as cups and egg cartons. Fernández says they hope to transition to making things on a larger scale soon. "Right now, we are working on a scale large for a lab, small for an industrial scale," Fernández said. "Basically, [we] are trying to explore the limits of the technology."

The bioplastic the lab developed is fully degradable -- so much so, in fact, that they were able to grow a California Blackeye pea plant in soil enriched with its chitosan bioplastic over a three-week period.

Fernández says he has heard from companies who have excess chitin and would like to do something productive with it, as well as companies looking for new degradable and sustainable materials. "The work that we are doing now is actually to fill the gap between these two people," Fernández said.