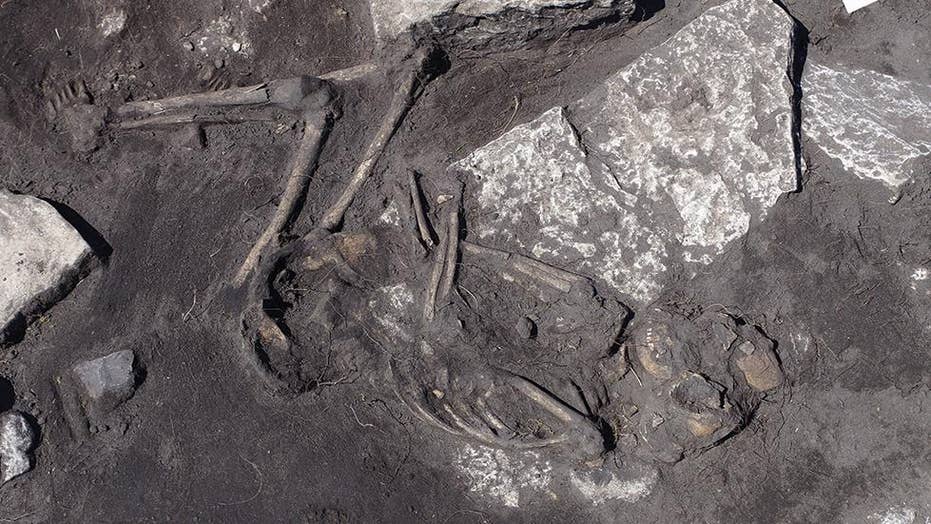 Archaeologists uncover evidence of a sudden and violent mass murder in Sweden. Discovered at the site were at least 26 skeletal remains along with scattered beautiful jewelry and ornaments.

Archaeologists have unearthed details of a gruesome fifth-century massacre that has drawn comparisons with HBO's hit television series “Game of Thrones.” The mysterious site, long thought to be “cursed,” is now revealing its horrific history.

The excavations at the Sandby borg fort on the Baltic island of Öland offer “a unique snapshot of domestic life and abrupt death,” according to researchers, who published their findings in the journal Antiquity.

“The harrowing events of the mass murder at Sandby borg are witnessed by the skeletal remains of villagers, surrounded by the seemingly panicked scatter of precious possessions and remnants of half-eaten food,” they said, in a statement. “So traumatic was the incident, or so feared were the attackers, that the fort, with dead lying where they fell and livestock dying of starvation in their pens, was left largely untouched; a cursed site shunned until the excavations began.”

Archaeologists from the Bohuslans Museum and the Kalmar County Museum report that the site contains at least 26 skeletons, including children. The bones were found inside the remains of houses and sprawled across the fort’s main street, indicating that a massacre took place at Sandby borg.

“Several show signs of violent attack, with the position of some suggestive of instant death, and others displaying signs of a more lingering demise,” the experts explain.

In one house, experts found the charred skeletal remains of an elderly man who fell motionless, either dead or unconscious, onto an open fireplace.

In one house, nine skeletons were found, two of which were partially burned, hinting that the attackers may have attempted to burn the structure down. The house also contained the skeleton of a youth aged between 12 and 15, who appears to have fallen onto the body of another victim after being attacked.

Remains of food were also discovered next to the house’s hearth, supporting the theory that the mysterious attackers caught the fort’s inhabitants by surprise.

Most of the skeletons found lack “defensive wounds” that are typically found on hands and forearms, according to the archaeologists. “This pattern leads us to conclude that the perpetrators comprised a large number of people, striking simultaneously in several houses, and that several of the victims were not in a position to defend themselves,” the study’s authors explain.

An apparent lack of looting at Sandby borg adds another layer of mystery to the massacre. Experts found silver brooches and pendants, imported glass beads, cowrie shells from the Mediterranean or Black Sea, as well as a Roman gold coin.

While the specific circumstances surrounding the attack are unknown, archaeologists note that the late fifth century was a time of great upheaval. While Roman control did not reach as far Scandinavia, the collapse of the Western Roman Empire in 476 A.D. sent shockwaves through neighboring regions.

“A social and economic crisis can be identiﬁed in various areas of Scandinavia during this time, as indicated by an abrupt decline in settlement activities, with numerous examples of farms being deserted or even destroyed during this time,” explained the researchers, in their paper. “The assault on Sandby borg may have been the result of subsequent power struggles on the island, at a time when the political map and power structures were being rewritten across the European continent.”

The macabre discovery at Sandby borg is just the latest in a series of fascinating archaeological finds in Sweden. In a separate project at Kanaljorden in central Sweden, archaeologists uncovered mysterious 8,000-year-old skulls mounted on wooden stakes that shed new light on grisly Stone Age rituals.

The remains of an ancient tomb have also been found at a site dubbed “Sweden’s Stonehenge.”