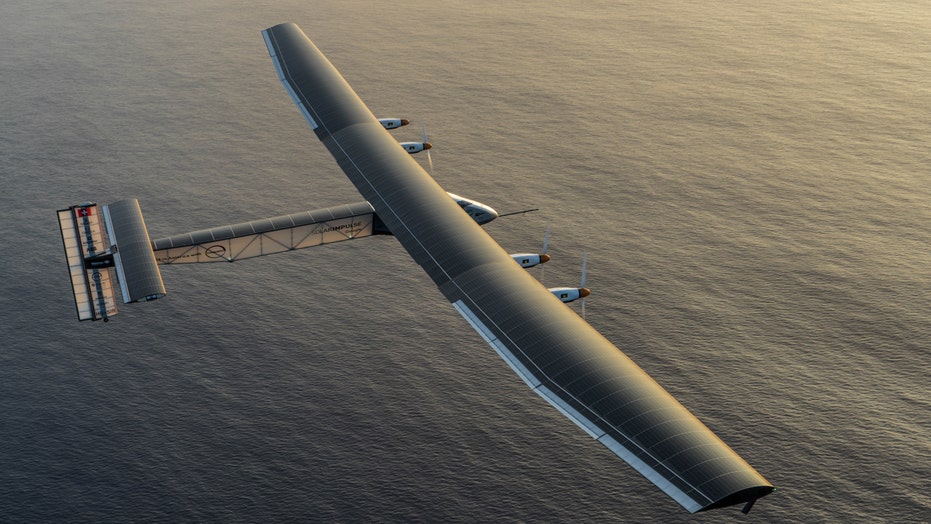 Solar Impulse 2, which flew over the Statue of Liberty on its historic solar-powered global journey Saturday, continues to prove the vast potential of renewable energy, according to pilot Bertrand Piccard.

The plane landed at New York’s JFK airport at 4 a.m. ET on Saturday, completing the 14th leg of its trip.

“In the 21st century, liberty is to be free from fossil energy and pollution,” said Solar Impulse chairman and pilot Piccard, during a press conference at JFK. “We can have clean technology that creates jobs, sustains growth – it’s a new market for the world.”

The record-breaking plane has travelled 18,540 miles without a single drop of fuel since setting off on the first leg of the trip from Abu Dhabi to Oman in March 2015.

A larger version of a single-seat prototype that first flew six years ago, Solar Impulse 2 is made of carbon fiber and has 17,248 solar cells built into the wing that supply the plane with renewable energy, via four motors. The solar cells recharge four lithium polymer batteries, which provide power for night flying.

To accommodate the solar cells the plane has a 236-foot wingspan, similar to that of a Boeing 747. The aircraft weighs just 2.3 tons, similar to a family car.

However, Solar Impulse 2’s comparatively low speed (it typically flies at 30 to 40 mph) could prevent the adoption of solar-powered technology for commercial passenger aircraft.

Nonetheless, the pioneering aircraft could drive innovation in a number of areas. Andre Borschberg, who is taking it in turns with Piccard to fly the single-seat aircraft around the world, described Solar Impulse 2 as “a flying smart grid,” during the press conference.

Power and automation specialist ABB is one of the companies partnering with Solar Impulse, providing engineering expertise during the global trek. “What they are doing in the air could definitely be done on the ground,” Conor Lennon, ABB’s global head of special projects, told FoxNews.com, adding that the plane could help develop more efficient battery technology.

Other partners include polymer specialist Covestro, which developed a new form of microcell insulation foam for Solar Impulse 2, and chemical firm Solvay, which is providing a number of products, from specialty polymers to lubricants.

Piloted by Borschberg, the solar-powered plane took off from Lehigh Valley, Pennsylvania after 11 p.m. ET Friday and flew over the Statue of Liberty during a 4 hour-41 minute flight to JFK.

“All morning, when I was over the Hudson River I felt like a 3-year old kid looking at a Christmas tree, it was so beautiful,” said Borschberg, during the press conference.

Borschberg broke a number of records on the eighth leg of Solar Impulse’s 2 journey, landing in Hawaii on July 3 2015 after an incredible 4,480-mile, 118-hour flight from Japan. The journey shattered the record for longest solar-powered flight in terms of distance and duration. Borschberg also broke the record for longest non-stop solo flight without refueling, which previously stood at 76 hours and 45 minutes.

The next leg of the journey takes Solar Impulse 2 on a risky non-stop flight across the Atlantic. Piloted by Piccard, the trans-Atlantic flight has not yet been scheduled.

Prior to its arrival in Lehigh Valley, Solar Impulse 2 made stops in India, Myanmar, China, Japan, Hawaii, California, Phoenix, Tulsa and Dayton. After flying across the Atlantic, the final leg of the odyssey is from Europe to Abu Dhabi.