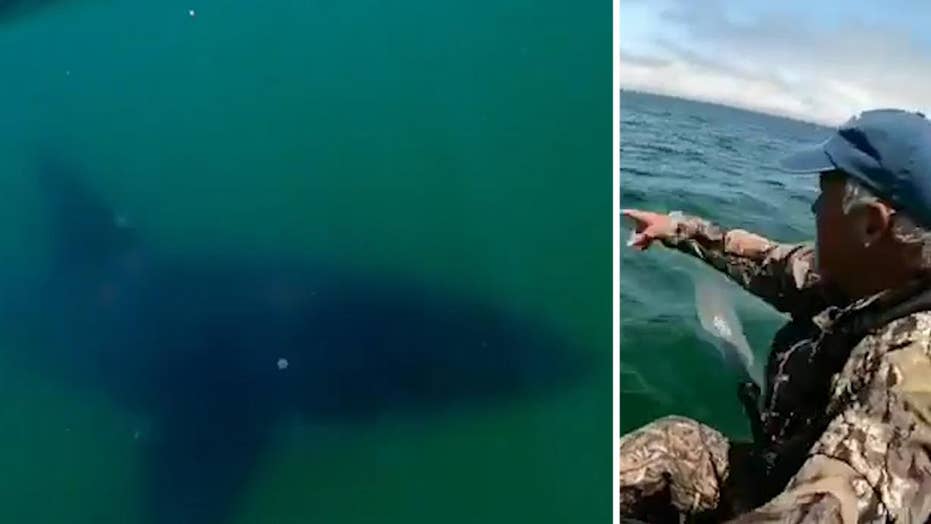 Raw video: Man fishing off the coast of Monterey, California has large shark swim by his kayak twice before swimming away.

A California kayaker fishing for halibut got a surprise visit from a 12-foot great white shark off the coast of Monterey this week.

Eddy Willis, a California native who now works for the Department of Wildlife in Nevada, captured the exciting encounter on video.

"Great white shark. There he is!" Hill exclaimed, while dipping the camera underwater to capture a better look at the sea creature.

"I just got my first great white shark — hell yeah!"

The shark swam around Willis' kayak twice before disappearing into the darkness.

"I just got my first great white shark — hell yeah!" Willis shouted into the camera, ending the 30-second clip.

Willis said it took him three years to get footage of a great white. The kayaker has had encounters with plenty of marine life in the past, including humpback whales.

“To me, I love whales, I love sharks ... It’s an adrenaline rush more than anything," Willis told KIRO7-TV after he filmed a close encounter with a pod of whales in Half Moon Bay back in July 2016.

The kayker said he was going on a "coastal tour," attempting to test out new fishing spots along the California coast.

Friends of the kayaker congratulated him on his rare sighting.

"I would be scared to death... But I love your joy and enthusiasm over this treasurer you found in the ocean today... good on you," one Facebook user wrote.

"Happy for you Eddy.. I’d be scared to death," one woman commented.

Willis thanked everyone for their comments and assured his friends he wasn't frightened at all.

"I love sharks ... and I will get more videos," he promised.