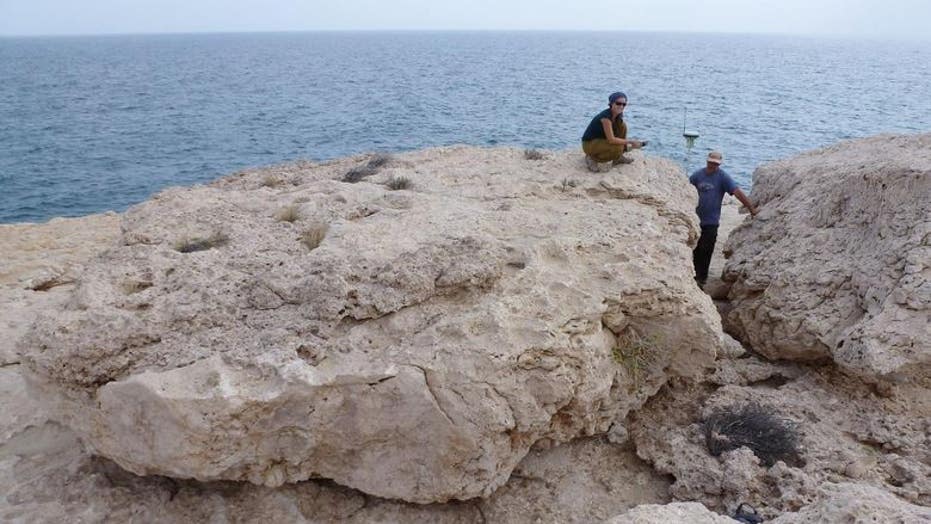 A powerful tsunami with 49-foot waves that tossed boulders as heavy as tanks inundated Oman about 1,000 years ago, scientists say.

Scientists from several international universities have found multiple large boulders that were apparently carried inland amid the catastrophic event.

"There we identified 41 large boulders, which were apparently carried inland by the force of the water," Gösta Hoffmann, from the Institute for Geosciences at the University of Bonn, said in a statement.

The largest of these rocks weighs about 100 metric tons, which is more than a Leopard tank. On the rock: Magdalena Rupprechter, GUtech, Oman; to the right: Gösta Hoffmann, University of Bonn. (Anne Zacke) (Anne Zacke)

Researchers believe that some of the boulders were formed when the tsunami destroyed parts of the cliffs along a particular strip of coastal Oman. The largest boulder weighed in at about 220,000 pounds.

Quartz crystals in the rock allowed scientists to determine how long the boulders have been in the spot where they were found. "Many of these measurements gave us a value of about 1,000 years," said Hoffmann.

The study, which will be published in the journal Marine Geology, also suggests that tension in the Arabian and Eurasian tectonic plates beneath the Arabian Sea can build up and be unleashed very fast.

"It is therefore extremely important that a tsunami early warning system is put in place for this region," the geologist said.