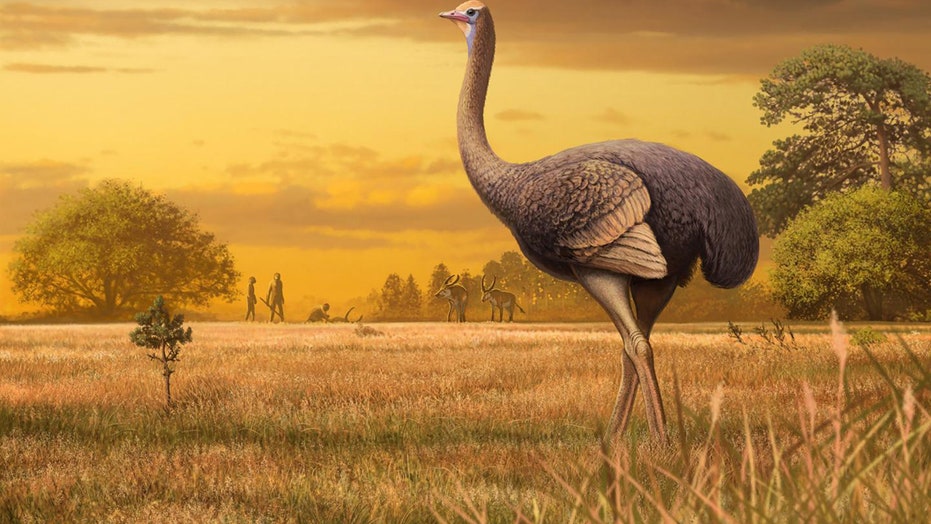 This is one big bird.

Researchers have recently discovered the fossils of one of the largest birds that ever lived, estimating it weighed nearly 1,000 pounds and stood more than 10 feet tall. The fossils of the flightless bird, part of the species Pachystruthio dmanisensis, were recently found in a Crimean cave and is the first time a bird of this size has been discovered in the Northern Hemisphere.

"When I first felt the weight of the bird whose thigh bone I was holding in my hand, I thought it must be a Malagasy elephant bird fossil because no birds of this size have ever been reported from Europe," the study's lead author, Dr. Nikita Zelenkov, said in a statement. "However, the structure of the bone unexpectedly told a different story."

PaleoArt of the bird discovered in a Crimean cave. (Credit: Andrey Atuchin)

The study's abstract notes that the bird was "a good runner," which may have played a part in helping it evade predators.

It's likely that the bird also lived alongside early humans in Europe, approximately 1.8 million years ago; "thus, this giant bird was likely a typical component of eastern European faunas at the time of early hominin arrival," the abstract added.

The enormous weight of the bird would make it "nearly double the largest moa, three times the largest living bird, the common ostrich, and nearly as much as an adult polar bear," Zelenkov said.

Zelenkov and his fellow researchers believe it's possible the bird was hunted by early humans, who may have used it for its meat, bones, feathers and eggshells.

It's unclear whether the bird was related to ostriches or others, as Zelenkov said the team doesn't have enough data yet to make the determination. However, the site where it was found may hold the key to unlocking Europe's ancient secret.

"The Taurida cave network was only discovered last summer when a new motorway was being built," he said. Last year, mammoth remains were unearthed and there may be much more to that the site will teach us about Europe's distant past."

The research was published on June 26 in the Journal of Vertebrate Paleontology.