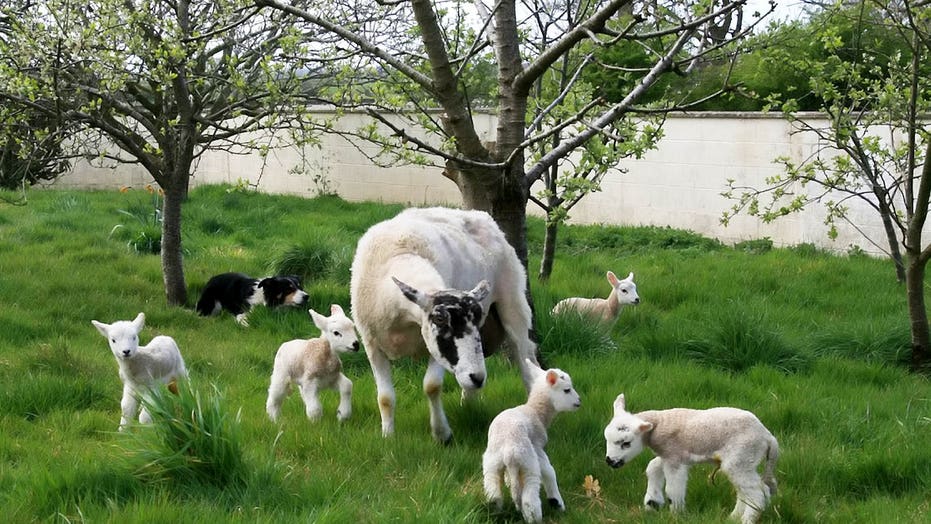 A female sheep in England has given birth to five healthy lambs with an American flavor: they're named after characters from "The Simpsons," British news agency SWNS reports.

The ewe, aptly named Marge, gave birth on April 12 at Castletown Estate, according to farm manager James Marshall. Marshall said this was the first time that quintuplets were born at the farm.

A ewe has defied odds of a million to one by giving birth to a set of five healthy lambs - named after characters from The Simpsons.  The incredibly rare quintuplet set was born on Easter Sunday (April 12) and gave farm manager, James Marshall, quite a shock when they arrived at Castletown Estate. (Credit: SWNS)

“To have five fit and healthy lambs is quite something," Marshall, 51, said. "Usually what happens is that one or two don’t make it, but for all of them to be healthy and evenly sized, it’s a special moment."

"Even the smallest lamb weighs no less than what an average lamb from a set of triplets would weigh," he added.

The news is as fine and dandy (like sour candy) after scans of a healthy Marge only predicted four lambs. Instead, Bart, Milhouse, Lisa, Maggie and Edna were all born.

Marshall had to count twice when he noticed five babies dotted around the mother - named after Simpsons' matriarch Marge - because scans had only predicted four. Both mother and lambs - affectionately named Bart, Millhouse, Lisa, Maggie and Edna - are doing extremely well. (Credit: SWNS)

The quintuplets and mom are all doing well, living in the back garden of Toby and Clemmie Mounsey-Heysham, the ninth generation of the Mounsey family to have owned Castletown Estate since 1802, SWNS added.

“Their birth was an Easter miracle, as it was the first time that a ewe at the farm had quintuplets," Clemmie said. “To share the news that one of our ewes has given birth to quintuplets is just wonderful -- especially given the strange times we are currently experiencing.”

Marge, who is 4 years old, is getting an extra feed per day, while the five lambs are being bottle-fed three times per day, in addition to grazing around the garden at the near-4,000-acre estate.

Sheep's diets consist of hay and grass, according to OpenSanctuary.org, which added that 1 to 2 gallons of water per day are also needed for the sheep to stay well-hydrated.

"I don’t think the Simpsons would have ever heard of Cumbria, so to think you have Bart, Lisa and Maggie running around in your back garden is quite surreal," Clemmie added, commenting on the lambs' names, while adding the family has joked the ram is named Homer, after the patriarch of the Simpson family.

“As the children get older, no doubt they will watch the Simpsons and enjoy it as we did when we were little. It’s just a nice family cartoon that has been on the box for decades," Clemmie explained. “There’s not many cartoons which brings the family together in the way the Simpsons does.”

"The Simpsons" is currently in its 31st season, airing Sunday nights on Fox.