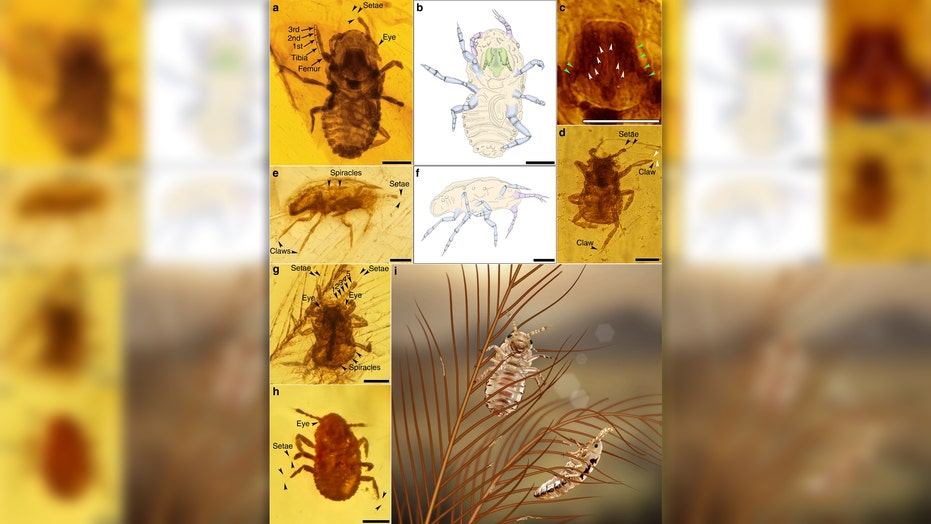 Paleontologists have discovered that feathered dinosaurs were eaten alive by lice-like insects, according to a new study.

The researchers looked at pieces of amber, roughly 99 million years old, and found that the feathers are covered with lice-like insects that belonged to a newly discovered species, known as Mesophthirus engeli. Of the 1,000 specimens that were examined, 10 of them had the insects and, in one case, a feather showed signs of being eaten.

"This new insect clade shows a series of ectoparasitic morphological characters such as tiny wingless body, head with strong chewing mouthparts, robust and short antennae having long setae, legs with only one single tarsal claw associated with two additional long setae, etc," the researchers wrote in the study's abstract.

"Most significantly, these insects are preserved with partially damaged dinosaur feathers, the damage of which was probably made by these insects’ integument-feeding behaviors," they continued. "This finding demonstrates that feather-feeding behaviors of insects originated at least in mid-Cretaceous, accompanying the radiation of feathered dinosaurs including early birds."

One of the study's co-authors, Chungkun Shih, a visiting professor at Capital Normal University in China, told The Guardian “[t]his is the earliest recorded, or formally documented, [instance of] lice or louse-like insects feeding on feathers.”

The specimens of M. engeli were nymphs and would have likely reached approximately 0.5 millimeters in length when fully grown, the researchers found.

Shih said the minuscule size of the insects surprised him.

“Based on our studies of fossil fleas, we thought that if we were looking for lice, the size may be bigger than today’s lice, but [they] turned out to be very small,” he told The Guardian. “That can explain why on compression fossils [in rocks] we cannot find any lice.”

The feathers are likely from two types of dinosaur, including a pennaraptoran, The Guardian reported.

The research was published in the scientific journal Nature Communications.