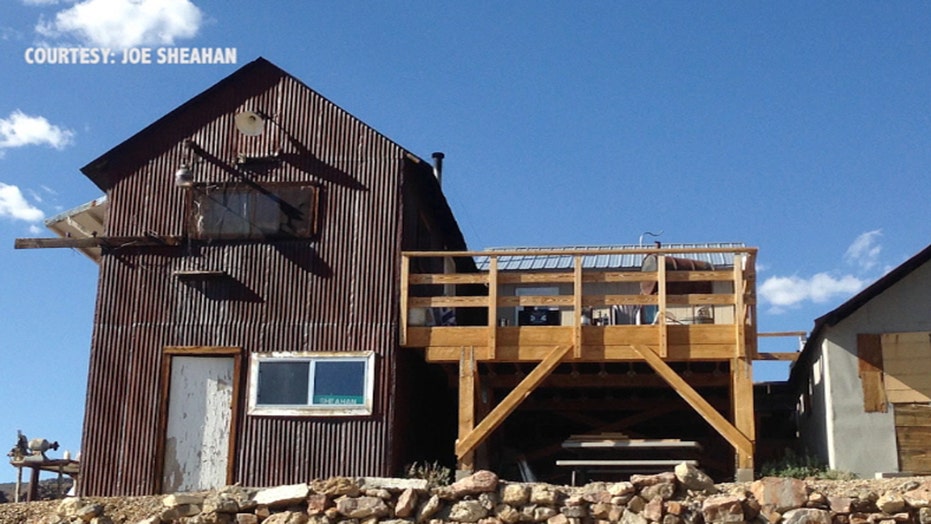 Joe Sheahan is in the fight of his life to save his family’s Nevada mine from being swallowed up by the federal government's mysterious Area 51.

Technically, Sheahan’s family no longer even holds title to Groom Mine, which it owned for 130 years. The federal government took the deed through eminent domain after first offering the Sheahans $333,300, a price family lawyer James Leavitt called “embarrassingly low.” The family is fighting back in federal court, but if the Sheahans and Uncle Sam can’t agree on a value, it could wind up before a jury.

Possibly more interesting is what the federal government wants with a parched stretch of rural Nevada desert and an old mine that hasn’t been active in decades. The area is known for two of the feds’ most closely guarded secrets: nuclear testing and UFOs.

So far, the family has not been paid for the land. Initially, the family was sued by the federal government in September of 2015 in a complaint case of eminent domain. A few days later the government then filed a motion to take the over the property.  Now, Appraisal reports are being exchanged in the discovery phase of the litigation. If the parties cannot reach a sufficient value for the land, the Sheahans are prepared to fight it in a jury trial.

The mine hasn’t been in full operation since 1954, but until fall of 2015 family members went out from time to time to blast for minerals.  The 400 acres of land sits almost 6,000 feet above sea level with panoramic views of the surrounding Groom Mountain Range and borders the Nevada Test and Training Range, which includes Area 51. According to Sheahan, his family’s land had always been highly sought after by the U.S. Air Force base looking to expand its flight-testing range, “They told me the land was like a suit hemmed in too tight that needed to breathe, that’s why they want our land“ Sheahan said.

Sheahan told Fox News that Air Force officials started showing up unannounced on the property in the 40’s and 50’s, intimidating his grandparents.  He said his family complained to the Air Force, but nothing happened. Then nuclear tests came without warning. According to the Las Vegas Review Journal archives, on Jan. 27, 1951, the Air Force detonated the first above-ground test on land next to the Groom Mine. Sheahan says his family wasn’t told about the test.  “This bomb goes off, who do you call, who do you Google, there’s no one … those blasts did significant damage to the property, not only in radiation,” he said. Sheahan claims family members and mine workers suffered long-term radiation effects and says some livestock died from beta burns.

In the winter of 2014, government officials from the Department of Defense and the U.S. Air Force approached the Sheahan family about purchasing the property.  At that time, Sheahan and other family members had never had the property appraised but he says the family thought offers of $2.4 million, $5.2 million, and $1.5 million from the Air Force were too low and so they rejected them. “We’re not going to sit down with those numbers at the table.” said Sheahan.

The Air Force confiscated the property on Sept. 16, 2015 through a federal court ruling in US District Court in Nevada. The family had three outside experts appraise the property after the seizure. Due to its proximity to Area 51 and the mineral rights to the land, each appraiser recognized the “unique value” of the property and came to the conclusion that the real value of the land was worth upwards of $44 million to $116 million dollars, Leavitt told Fox News.

In a statement on Nov. 9, 2016 obtained by Fox News, a prior commander at Nellis Air Force Base, Col. Thomas E. Dempsey explained the reason for seizing the land; “Over the years, technology has increased demand for the test and training range assets and the Air Force has developed infrastructure that directly supports range activities that cannot be replicated elsewhere.”

Leavitt is fighting to get the family just compensation, which real estate expert and Fox News Legal Analyst Bob Massi explains as “an objective understanding of the value of that property.”

Fox News reached out for a comment from Justice Department, which is representing the Air Force but was told by deputy press secretary Wyn Hornbuckle the department will not comment on pending litigation.

'IT WAS NOT FROM THIS WORLD': WITNESS TO 'BRITAIN'S ROSWELL' UFO INCIDENT BREAKS 36-YEAR SILENCE

Freelance local investigative reporter Glen Meek has been researching the Sheahan case since the government seized the land and is making a documentary about the land dispute. He noted government’s unwillingness to provide answers and boiled it down to two major fundamental issues - individual rights and national security, saying “the government’s position is pretty much, the testing that’s going on there now is incompatible with civilians having private land in that area.”

The case is currently in discovery. Sheahan says he is a God-loving American and does not want to be portrayed as unpatriotic but wants his family to receive just compensation.  Sheahan and Leavitt expect a late spring or early summer court date where a jury will decide on the matter of just compensation.