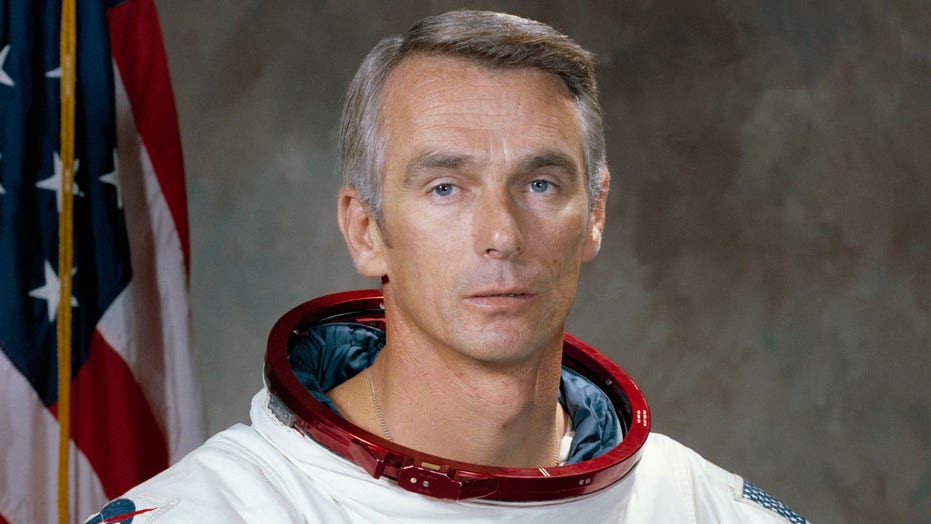 Gene Cernan, an early NASA astronaut who was the last man to set foot on the moon, died Monday, NASA announced in a tweet. He was 82.

Details of Cernan's death were not immediately known.

We are saddened by the loss of retired NASA astronaut Gene Cernan, the last man to walk on the moon. https://t.co/Q9OSdRewI5 pic.twitter.com/gPdFTnXF2C

His words would not become as famous as Neil Armstrong's first sentence spoken from the moon, however, Cernan's final goodbye to the moon was just as poetic.

"...America's challenge of today has forged man's destiny of tomorrow," Cernan said. "And, as we leave the Moon at Taurus- Littrow, we leave as we came and, God willing, as we shall return, with peace and hope for all mankind. Godspeed the crew of Apollo 17."

Gene Cernan, commander of the last moon landing, tells his story in the new documentary, "The Last Man on the Moon." (NASA)

In the 2007 documentary "In The Shadow Of The Moon," Cernan spoke of the epiphany he experienced while standing on the desolate -- yet majestic -- surface.

"There is too much purpose, too much logic, it was just too beautiful to happen by accident," Cernan said. "There has to be somebody bigger than you and bigger than me...And I mean this in a spiritual sense, not in a religious sense, there has to be a creator of the universe who stands above the religions that we ourselves create to govern our lives."

Eugene Cernan salutes the American flag during the Apollo 17 mission in 1972. (NASA)

Cernan had previously served as the lunar module pilot on Apollo 10 and was a pilot on the Gemini IX mission.

On the Apollo 10 flight, Cernan and Commander Tom Stafford flew to within eight miles of the surface of the moon. The May mission served as a "dress rehearsal" for the historic Apollo 11 mission two months later.

Cernan became the second American to walk in space on the Gemini IX mission in 1966.

We mourn the loss of our friend Gene Cernan, the Last Man on the Moon and a hero for the ages. Godspeed the Commander of Apollo 17. pic.twitter.com/pRQtpkQkW6

Cernan logged 566 hours and 15 minutes in space, of which 73 hours were spent on the surface of the moon, according to NASA.

Born in Chicago in 1934, Cernan received an electrical engineering degree from Purdue and a Masters of Science in aeronautical engineering from the U.S. Naval Postgraduate School. A captain in the Navy, he was selected in NASA's third group of astronauts in 1963.

Cernan's death leaves six astronauts remaining who have walked on the moon.