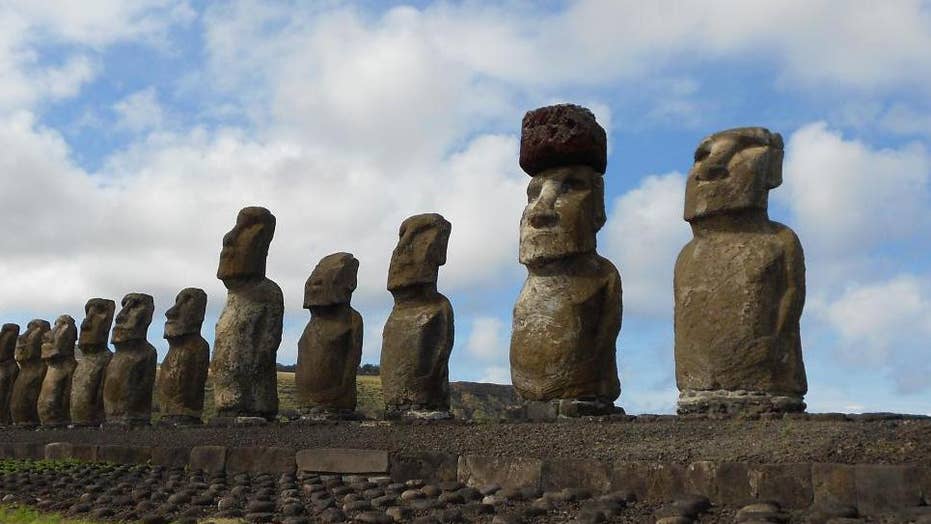 Experts have unlocked more secrets of the mysterious ancient monuments on Easter Island.

The famous statues, or moai, are supported by monumental platforms called ahu. Researchers, however, have long wondered why the monuments were placed in specific locations on the island.

Now, a team of experts has harnessed spatial modeling techniques to work out the relationship between ahu construction and natural resources on Easter Island, or Rapa Nui. They discovered that the ahu were built near freshwater sources, which are limited on the island.

"The issue of water availability (or the lack of it) has often been mentioned by researchers who work on Rapa Nui/Easter Island," said Carl Lipo, an anthropologist at Binghamton University, State University of New York, in a statement. "When we started to examine the details of the hydrology, we began to notice that freshwater access and statue location were tightly linked together. It wasn't obvious when walking around--with the water emerging at the coast during low tide, one doesn't necessarily see obvious indications of water.”

“Places without ahu/moai showed no freshwater,” he added. “The pattern was striking and surprising in how consistent it was.”

Researchers had already identified groundwater discharge in coastal areas as a key factor in the statues’ placement on Easter Island’s coast. In the latest stage of the research, experts examined how the availability of freshwater in certain areas was linked to the methods and means of building the statues.

Around 900 statues, or moai, are dotted around Easter Island.

"The monuments and statues are located in places with access to a resource critical to islanders on a daily basis--fresh water,” said Terry Hunt of the University of Arizona, in the statement. “In this way, the monuments and statues of the islanders' deified ancestors reflect generations of sharing, perhaps on a daily basis--centered on water, but also food, family and social ties, as well as cultural lore that reinforced knowledge of the island's precarious sustainability.”

Hunt noted that the island’s culture of cooperation can explain how the islanders survived for centuries despite limited natural resources.

Researchers have compiled comprehensive data for the western part of Easter Island and are planning to complete a full survey of the famous site.

Hoa Hakananai'a, from Orongo, Easter Island (Rapa Nui). Easter Island's stone statues of human figures, known as moai, were probably carved to commemorate important ancestors and were made from around AD 1000 until the second half of the seventeenth century. From the British Museum's collection. (Photo by CM Dixon/Print Collector/Getty Images)

The remote Pacific island, located more than 2,000 miles off the coast of Chile, continues to be a source of fascination for historians. Last year, researchers, including experts from Binghamton University, worked out how ancient islanders were able to place massive stone hats on the statues.

In 2016, research conducted on artifacts from the island questioned the theory that the ancient civilization there was destroyed by warfare.

File photo - An elderly woman sits reading by a large stone statue, or moai from Easter Island on display at the British Museum, London, 1967. (Photo by Romano Cagnoni/Hulton Archive/Getty Images)

Experts, also from Binghamton University, studied hundreds of ancient items found on the shores of Easter Island. Previously, the artifacts were thought to be spear points, but analysis reveals that they were likely general purpose tools.

Carved from obsidian, or volcanic glass, thousands of the triangular objects, known as mata'a, litter the surface of the island.

Some scientists have estimated, that, at its height, Easter Island’s population may have been as high as 20,000, but fell over centuries after the island’s trees and palms were cut down to build canoes and transport its famous giant statues. One theory suggests that the deforestation led to soil erosion, impacting the island’s ability to support wildlife and farming, and the collapse of its civilization.

However, other experts have questioned whether Easter Island ever supported a large population, citing instead the arrival of Europeans, who brought diseases and took islanders away as slaves.