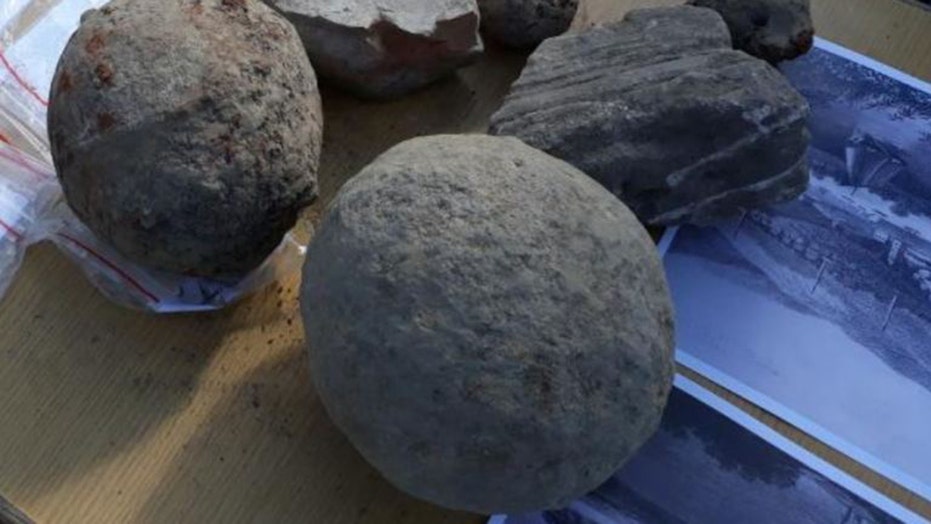 No, this isn't the Onion. Cannonballs that were purportedly used by Dracula during the 15th century have been discovered in Bulgaria.

Researchers have found medieval cannonballs from culverins, an early form of cannon, that were most likely used by Wallacian Voivode Vlad III Dracula, more commonly known as Vlad the Impaler, during his bloody battle in 1461 with the Ottoman Turks, according to a report in Archaeology in Bulgaria.

The discovery was made in Svishtov, a small town in the northern part of the country with a population just over 37,000, by Professor Nikolay Ovcharov from the National Institute and Museum of Archaeology in Sofia and his team.

Small cannonballs from culverines (left) have been found by archaeologists in the 15th-16th century layer at the Zishtova Fortress in Bulgaria’s Svishtov leading to hypotheses that they must be from 1461 – 1462 when Wallachian Voivode Vlad Dracula besieged and conquered briefly the Danube fortress. (Credit: Svishtov Municipality)

“What’s really interesting is that from the [early] Ottoman period we have found cannonballs. We rejoice at those small cannonballs because they are from culverins," Ovcharov said in an interview with Nova TV. "These were the earliest cannons which were for the 15th century, up until the 16th century, they weren’t in use after that. These were still very imperfect cannons. That was precisely the time of Vlad Dracula, there is no doubt that they are connected with the siege [and conquest of the Zishtova Fortress] by Vlad Dracula in 1461."

Culverins are medieval cannons and Ovcharov believes these were most likely used during the middle part of the 15th-century when Vlad the Impaler was fighting for control of the Zishtova Fortress.

This painting, "Vlad the Impaler and the Turkish Envoys," by Theodor Aman (1831-1891), allegedly depicts a scene in which Vlad III nails the turbans of these Ottoman diplomats to their heads. (Public domain)

The fortress's long history stretches back way beyond Vlad the Impaler. Ovcharov and his team have found inscriptions at the site that mention a cohort from the Roman Empire’s First Italian Legion.

“We have a partially preserved inscription from the 4th century AD, from the Roman period, about a cohort from the First Italian Legion," Ovcharov added in the interview with Nova. “Our hypothesis is that this is from the last period of the Roman presence in this region. We know that they had been quartered at Novae, but towards the 4th – 5th century AD, as a result of the barbarian invasions, it became indefensible, it was abandoned, and the Late Antiquity fortress [that predated the Zishtova Fortress] was built here."

The researchers said they have also found larger cannonballs from later time frames at the dig site.

Ovcharov added that he was amazed that the fortress is so well-preserved, noting that the Russians had actually burned it in 1810, effectively ending its use during the Russian-Turkish War. "For a long time, I had thought that this fortress would be in an extremely severe condition but it has turned that they didn’t manage to do that much damage, and its level of preservation is rather good," he said.

The archaeologist said it's quite possible that Dracula stayed at the fortress after conquering it. “The truth is that Vlad Dracula besieged this place, conquered it, and most probably also resided here [briefly]," Ovcharov stated.

Excavations at the site will continue until June 15 and then there will be an additional exploration for a period of one to two years. Following that, Ovcharov said the fortress would be restored.

“The present excavations are a first step in the research of the fortress, and I hope that based on the engravings, which are literally like photographs, we will be able to do a very pleasant restoration, and will have one of the last fortresses of Tsar Ivan Shishman [before the Ottoman conquest], and a residence where Vlad Dracula stayed."

Though he was the inspiration for Bram Stoker's "Dracula," a horror tale that ultimately spawned the vampire phenomena, Vlad Dracula was perhaps even more frightening than the mythical creature.

Ovcharov mentioned a letter from Vlad Dracula to the King of Hungary, in which Dracula boasts about killing 410 Turks during the battle. "Some of them were probably impaled, in his style," the researcher stated.

In this picture taken Oct. 9, 2016, a portrait of Vlad the Impaler is hung on a wall in Bran Castle, in Bran, Romania.  (AP Photo/Andreea Alexandru) (The Associated Press)

"He was one of the most meticulous fighters against the Ottoman invasion. He was cruel but, at the end of the day, that was the Middle Ages, and he was allowed those things," Ovcharov said during the interview.

Dracula was held in captivity in Visegrád from 1463 to 1475, where stories of his cruel acts spread throughout Europe. He was ultimately killed in battle prior to January 10, 1477.