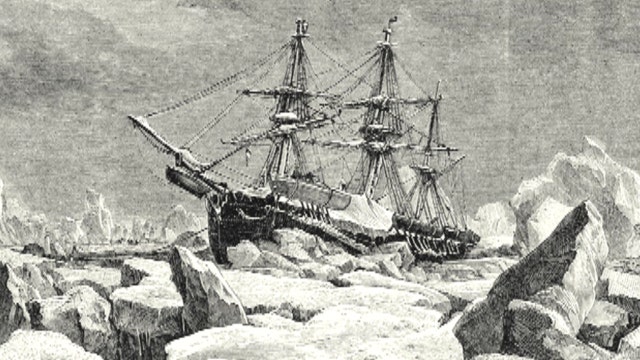 The wrecks of two famous Royal Navy ships that were lost on a doomed Arctic mission to locate the Northwest Passage have sparked talk of a modern "curse."

Last seen in the 1840s while under the command of Sir John Franklin, the fate of the “vanished” HMS Erebus and HMS Terror remained a mystery for almost 170 years.

The wreck of the Erebus was finally located in 2014, amid much fanfare, and the Terror was found two years later. The ships, which were among the most sought-after prizes in marine archaeology, are the subject of multiple songs, poems and novels.

What happened to most of the ships’ crew members, however, is still unknown.

Franklin and 128 handpicked officers and men had set out in 1845 to find the Northwest Passage, the long-sought shortcut to Asia that supposedly ran from the Atlantic to the Pacific by way of the harsh, ice-choked Arctic.

Experts believe that the ships were lost in 1848 after they became locked in the ice near King William Island and that the crews abandoned them in a hopeless bid to reach safety. Inuit lore tells of "white men who were starving" as late as the winter of 1850 on Royal Geographical Society Island in the north Canadian territory of Nunavut.

CBC News recently used Canada’s Access to Information Act to obtain the minutes of a meeting that took place last summer between officials, including Parks Canada staff, representatives of the Nunavut government, and Inuit heritage groups.

FILE - In this file image released by Parks Canada, shows a side-scan sonar image of a ship on the sea floor in northern Canada. Sir John Franklin was likely sailing on the HMS Erebus vessel when it vanished along with another vessel 170 years ago, Canada's prime minister announced Wednesday, Oct. 1, 2014.  (AP Photo/Parks Canada, via The Canadian Press, File)

CBC reports that some residents of Gjoa Haven, a remote hamlet near the wrecks, had linked a spate of deaths in the community to undersea search teams examining the ships’ final resting places. “They feel the wrecks are cursed and should not be disturbed,” said a Parks Canada official, according to the minutes of the meeting. The community had suffered a string of six tragic deaths over just two weeks in August, according to CBC.

The meeting was held prior to a Canadian government minister’s visit to Gjoa Haven.

ENTIRE ARCTIC EXPEDITION PERISHED, BUT NOT BECAUSE OF LEAD

Officials reportedly said no human remains were discovered in the wrecks.

Parks Canada told Fox News that it was deeply saddened by the losses that the community of Gjoa Haven suffered last summer. "The Wrecks of HMS Erebus and HMS Terror is a jointly-managed national historic site between Parks Canada and Inuit and all partners expressed condolences to the families and the community following the tragic deaths this past summer," explained a Parks Canada spokesperson, in a statement.

Inspired by similar initiatives at other Parks Canada locations, a Guardian program has been set up at the wreck locations that involve Inuit in the protection and monitoring of the HMS Erebus and HMS Terror sites.

The local community treats the wreck sites with great reverence.

"Elders blessed sand from Gjoa Haven that Inuit Guardians brought to the wreck of HMS Terror during their first visit to the site in August, where they performed a blessing," the Parks Canada spokesperson told Fox News. "A similar blessing was performed in 2015 on the wreck of HMS Erebus."

Both wrecks have been designated as historic sites by the Canadian government and a Parks Canada permit is required to access them.

"Parks Canada and Inuit are committed to working collaboratively to ensure the on-going exploration and management of the Franklin wrecks respects the perspectives of the local community," the Parks Canada spokesperson told Fox News. "Following last summer's tragedies, the community-based Umiyaqtutt Festival committee – of which Parks Canada is a member - consulted Elders in Gjoa Haven who expressed their wish that the Festival‎ be used as a forum for the community to heal together."

The fate of the sailors and Royal Marines on the Franklin expedition continues to captivate historians.

The ships’ crews all perished in the wastes of the Canadian Arctic and the bodies of most of the expedition members have never been recovered. However, a handful of graves have been found and the remains examined.

One theory suggests that lead poisoning from shoddily canned food and the ships’ water filtration system helped doom the expedition. However, research published last year in the journal Plos One challenges this notion. After analyzing bone and dental remains of crew members and comparing them to samples from a Royal Navy cemetery in the Caribbean, the researchers concluded that many of the crew were likely victims of starvation.