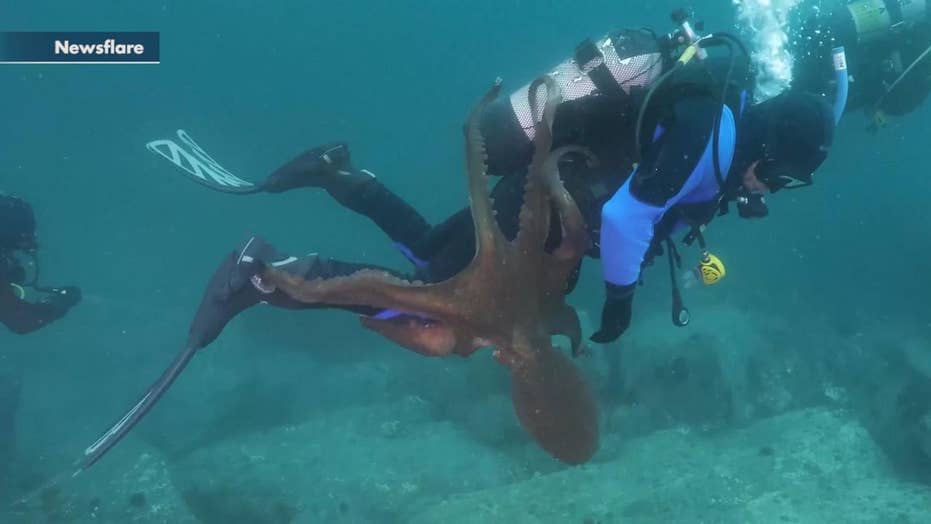 Giant octopus attacks scuba diver in the Sea of Japan

Raw video: Giant octopus latches on to Russian scuba diver in the Sea of Japan.

If you thought a giant octopus clutching you with its eight arms was the stuff of nightmares, think again.

A diver from Mayak Gamov, Russia, was exploring the Sea of Japan when the massive mollusk swam up to him and latched on. For a few harrowing seconds, the octopus started to swim toward the depths of the ocean. In the frightening footage, the octopus appears to use its sharp beak, hidden by its mouth, to bite him.

The diver eventually managed to break away from the creature unharmed and the octopus swam away.

Upon swimming away, the octopus changed its color in an effort to blend in with the sea floor.

Giant octopuses, which can grow up to 150 pounds, are normally shy around humans, news.com.au reports. However, there have been a few instances in which a giant cephalopod has wrestled with divers, including one incident in 2014 off the California coast.

The creatures are the most intelligent invertebrates on Earth, according to LiveScience. They generally live in chilly, coastal waters and have been spotted in areas such as California, Oregon, Washington, as well as Russia, Japan and along the Korean Peninsula.