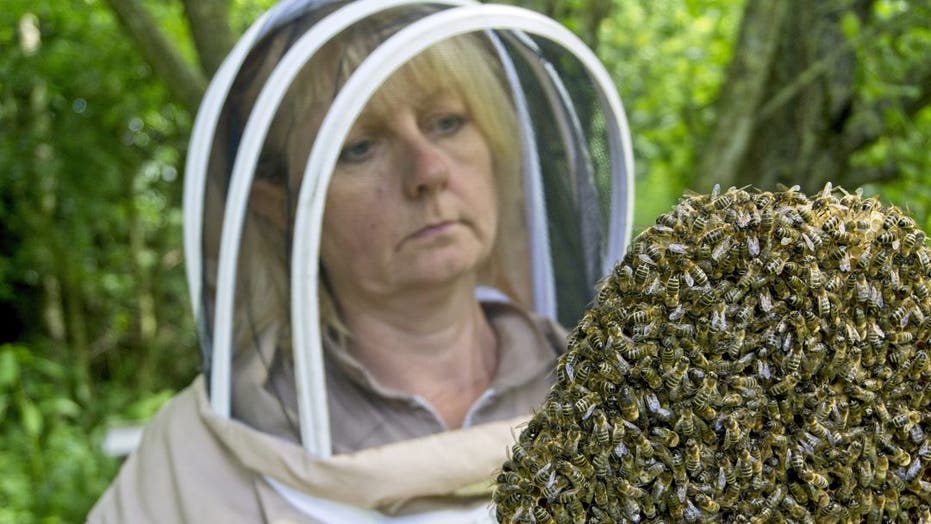 A beekeeper in England says she will continue with her job despite recently learning that she's allergic to getting stung.

Kath Cordingley, from Preston, Lancashire, said she was unaware that she was allergic to the buzzing insects until she was stung by one in 2016, British news agency SWNS reports. She went into anaphylactic shock at home and was later rushed to Preston Royal Hospital.

“When I got stung on the nose I felt sick, and dizzy, and my blood pressure was all over the place," the 54-year-old mom of two said.

A devoted beekeeper has risked her life each day to tend to her buzzy pals - despite being allergic to bees. Kath Cordingley, 54, says she would never consider quitting her job even if it meant potentially putting herself in danger. (Credit: SWNS)

She eventually received a desensitization immunotherapy treatment course that lasted for three years to help build up her immunity.

As for her refusal to quit, Cordingley acknowledges the risks but says she's not about to let her allergies get in the way of her beloved job.

“There is a danger involved, yes, but I carry an EpiPen with me at all times so I feel safe," Cordingley explained. “It’s my job now, it’s not a hobby. I can’t just quit. I could never stop doing this. Not for an allergy, not for anything.”

“We were concerned when she would get reactions, because they were severe," Kath's husband, Simon said. “It was potentially life-threatening and she was always going to be exposed to that danger. But I don’t think I could ever ask her to stop doing this, she loves it too much and bees are absolutely essential to our lives.”

Kath operates the Bee Center business (founded in 2016) along with husband Simon, who bought her a course in beekeeping for her 42nd birthday.

Cordingley she was unaware she was allergic to bee stings until she suffered severe anaphylactic shock at home in 2016 and was rushed to the hospital. Undeterred by the discovery, Kath decided to undergo a desensitization immunotherapy treatment course at Preston Royal Hospital. (Credit: SWNS)

“I thought I was going to get flights to some new country with lots of sun, you can imagine my disappointment on my 42nd birthday," she said jokingly. “But after about a month I was hooked and I was mesmerized by the bees — so I bought three colonies. I had about 60,000 bees in my car as I drove home and most of them escaped and I remember seeing a bee on my steering wheel and they were just everywhere.”

Those bees did not survive the winter and Kath said she would work harder to keep the insects alive.

“I did my research and began reading more and more about bees until I was ready to get some more," she continued. “We started out with just thousands of bees, and now we’ve had millions of them and I’ve devoted the last 12-odd years to them.”

“Bees are vital to our environment, and are absolutely essential to our planet’s survival.”


GET THE FOX NEWS APP