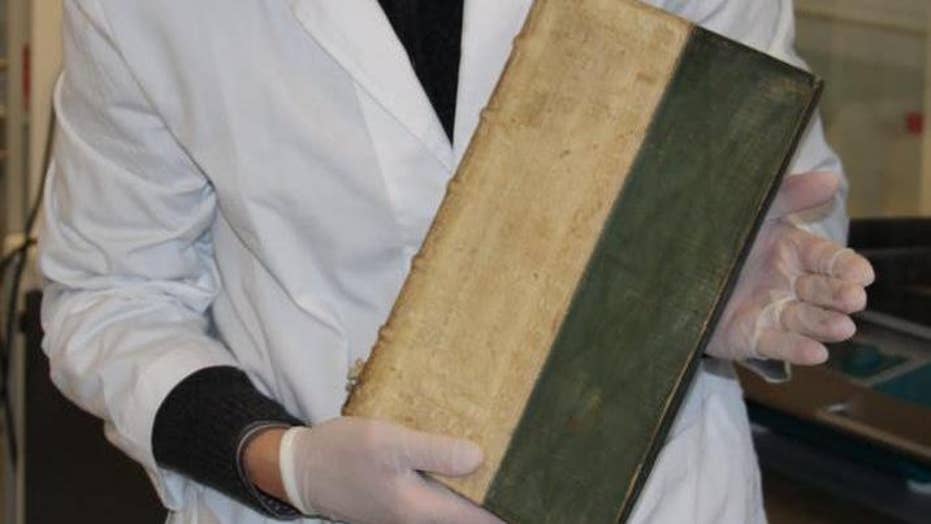 Researchers at the University of Southern Denmark found three books in their library that were covered in arsenic. The poison was intentionally put there, but why?

If books could kill … scientists in Denmark have found high levels of arsenic in three books from the 16th and 17th centuries.

Experts from the University of Southern Denmark made the startling discovery when they were studying fragments of medieval manuscripts that were used to bind the books.

Kaare Lund Rasmussen, an associate professor at the University of Southern Denmark, told Fox News that after the Danish Reformation in 1536 A.D. many Catholic books were destroyed. “Some were burned, some were thrown out,” he told Fox News, via email, noting that some parchments were also re-used to bind ‘new’ books from the 1500s and the 1600s.

RING FOUND IN BULGARIA THOUGHT TO BE A MEDIEVAL MURDER WEAPON

The inside of a book binding from one of the books, which dates back to the 16th century (Southern Denmark University)

The researchers wanted to identify the Latin texts used, or at least read some of the content, according to a column in The Conversation by Rasmussen and Jacob Povl Holck, a research librarian at the university.

“We were looking for writing which shows up as ink may contain copper or iron or calcium,” he added. “However, the moment we put the X-ray beam on the green surface we saw the fantastic high amounts of arsenic.”

Scientists used micro X-ray fluorescence technology, which is widely used to analyze the chemical properties of pottery and paintings. This analysis revealed that the green pigment on the books’ covers is arsenic.

A COLD WAR POISON RESURFACES IN A QUIET ENGLISH TOWN

The library is storing the poisonous volumes in separate cardboard boxes with safety labels in a ventilated cabinet, according to Rasmussen and Holck.

The experts say that the books highlight the potential risks posed by some older tomes.

“Next step is to warn librarians and readers of old books to wear protective gloves, and to advise libraries to store any green painted old books in a dry, dark environment out of harm’s way of people inhaling the air above the books,” Rasmussen told Fox News. “The reason for the latter recommendation is that arsenic has a tendency to transform to the airborne arsine (AsH3) given the right conditions of humidity and light. Besides the toxicity, arsenic is also carcinogenic.”

The arsenic-containing pigment on the old books may have been used, not for aesthetics, but to protect the volumes from insects and vermin in the 19th century, according to the researchers.

Arsine is formed when arsenic comes in contact with an acid, according to the CDC. The National Center for Biotechnology Information describes arsine as extremely toxic, and warns that the colorless gas can rupture red blood cells, causing death via renal failure.