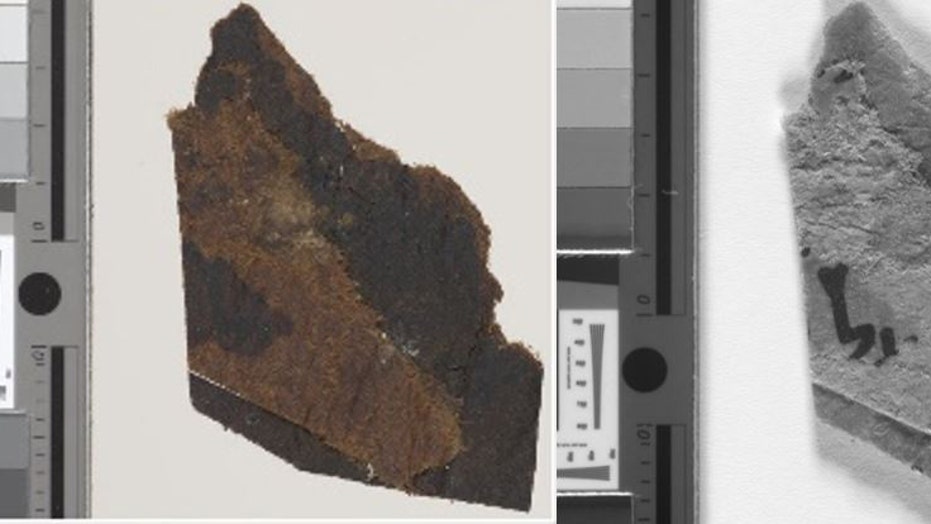 The fragments, which are housed at the University of Manchester in the U.K., shed more light on the famous scrolls. Some 51 fragments were imaged front and back, with six identified for further investigation. Of these, four were found to have readable Hebrew/Aramaic text written in carbon-based ink.

“The most substantial fragment has the remains of four lines of text with 15-16 letters, most of which are only partially preserved, but the word Shabbat (Sabbath) can be clearly read,” explained the University of Manchester in a statement. The text may be related to the biblical book of Ezekiel (46:1-3), it added.

“One piece with text is the edge of a parchment scroll section, with sewn thread, and the first letters of two lines of text may be seen to the left of this binding,” the university said in the statement.

“With new techniques for revealing ancient texts now available, I felt we had to know if these letters could be exposed,” Taylor added. “There are only a few on each fragment, but they are like missing pieces of a jigsaw puzzle you find under a sofa.”

Experts from the Faculty of Theology of Lugano in Switzerland and the University of Malta also participated in the study.

The first Dead Sea Scrolls were discovered in 1946 and 1947 in the Qumran caves in the Judean desert. Further scrolls were found in subsequent years, up to 1956. In total, 1,000 ancient religious manuscripts were discovered. The delicate fragments of parchment and papyrus were preserved for 2,000 years thanks to the dark, dry conditions in the caves.

The fragments held in the University of Manchester’s John Rylands Library were given in the 1950s by the Jordanian government to Ronald Reed, a leather expert at the U.K.’s University of Leeds.

“It was assumed that the pieces were ideal for scientific tests, as they were blank and relatively worthless,” explained the University of Manchester, in its statement. “These were studied and published by Reed and his student John Poole, and then stored safely away.”

The collection was donated to the University of Manchester in 1997.

The Dead Sea Scrolls continue to be a source of fascination. In 2018, for example, experts in Israel harnessed sophisticated imaging technology to reveal hidden script in some of the scrolls.

The technology, which was originally developed for NASA, identified new letters and words, giving experts fresh insight into the historic texts. One of the fragments may even indicate the existence of a previously unknown manuscript, according to the Israel Antiquities Authority, which conducted the research.

Also in 2018, researchers at Israel’s University of Haifa translated one of the last two parts of the Dead Sea Scrolls.

Scrolls in the collection of the Museum of the Bible in Washington D.C. have also been in the spotlight in recent years. Research revealed the scrolls to be fake.