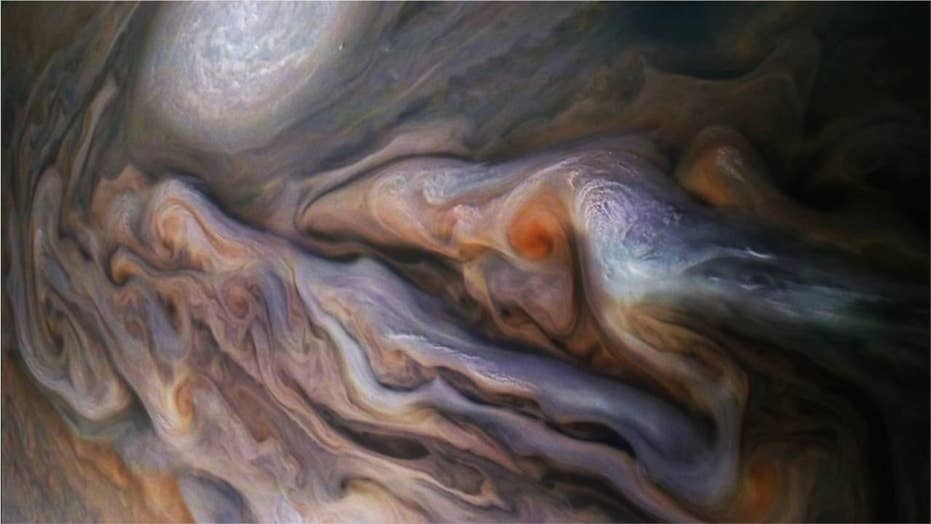 Images revealed during NASA's Juno mission have captivated the internet. Space enthusiasts are quick to examine the colorful clouds of Jupiter — hoping to catch a hint of a familiar shape among the mesmerizing swirls.

A "dragon's eye," "squid," and "dolphins" are among the "creatures" social media users have apparently spotted within Jupiter's vicinity. NASA's Jet Propulsion Laboratory frequently releases batches of new images as the spacecraft circles the gas giant.

On Dec. 21, Juno will mark its "halfway point" during its years-long mission.

"Juno is in a highly-elliptical 53-day orbit around Jupiter," NASA explained in a Dec. 12 news release. "Each orbit includes a close passage over the planet's cloud deck, where it flies a ground track that extends from Jupiter's north pole to its south pole."

NASA's Juno spacecraft was launched on Aug. 5, 2011, and arrived at Jupiter five years later — in July 2016. Juno's mission is slated to come to a close in July 2021 after the spacecraft slowly orbits Jupiter, collecting important data along the way.

"Juno's principal goal is to understand the origin and evolution of Jupiter. Underneath its dense cloud cover, Jupiter safeguards secrets to the fundamental processes and conditions that governed our solar system during its formation. As our primary example of a giant planet, Jupiter can also provide critical knowledge for understanding the planetary systems being discovered around other stars," NASA describes on its website.

As the spacecraft explores the fifth planet from the Sun, it continues to snap astonishing pictures. Here's a look at some of the images — and comparisons — that have gone viral in recent months.

In December, NASA pointed out something fishy in an image taken of Jupiter's sky.

A series of images taken in Jupiter's hemisphere on Oct. 29, 2018, appear to reveal a pod of dolphins "swimming" across the clouds. The pictures, which were taken about 11,400 to 32,000 miles from the top of the planet's clouds, were enhanced by scientists Brian Swift and Seán Doran.

"So long and thanks for all the fish! A cloud in the shape of a dolphin appears to be swimming through #Jupiter’s cloud bands in this series of color-enhanced images," NASA pointed out in a late November tweet, sharing a GIF of the images snapped by Juno.

The images inspired a variety of hilarious responses.

"So that's where the dolphins went! How are the fish on Jupiter? ... asking for a friend," another chimed in.

"Hey! What about the Sea Turtles above the Dolphin traveling the other way?" a man observed.

"A Dragon’s Eye? What do you see within the swirling clouds of Jupiter?" the NASA lab asked fans on Nov. 9.

The question prompted a flurry of responses — with many allowing their imaginations to wander.

"Quetzalcoatl!" another guessed, referring to an ancient term that translates to "feathered serpent" or "flying reptile."

"Dragon!!!" one man declared, outlining the picture with colors to form the face of the legendary creature.

The photo was snapped around 5 p.m. ET on Oct. 29 as the spacecraft made its 16th close flyby around Jupiter. It was enhanced by scientists Gerald Eichstädt and Seán Doran.

"A multitude of magnificent, swirling clouds in Jupiter's dynamic North North Temperate Belt is captured in this image from NASA's Juno spacecraft. Appearing in the scene are several bright-white “pop-up” clouds as well as an anticyclonic storm, known as a white oval," NASA explained in an online statement.

When NASA posted a photo of clouds in the Jovian jet stream, social media users had some fun poking fun at the "alien-like" face hidden in the swirls.

"It looks a little bit like something out of an Alien movie. The kind of egg you definitely don't want for breakfast," one Twitter user wrote.

Another user shared artwork that he or she interpreted to represent that shape hidden inside the clouds.

"Absolutely beautiful. Looks like a sea of blue marble. Very serene," another wrote.

The image was taken on Sept. 6, 2018, during Juno's 15th close flyby of Jupiter, according to a news release. The image was enhanced by Brian Swift and Seán Doran.

" A brown oval known as a 'brown barge' can be seen in the North North Temperate Belt region in the top-left portion of the image," NASA explains in a blog post.

The astonishing images come courtesy of the Juno spacecraft, which recently had its 13th close flyby of the planet. (NASA/JPL-Caltech/SwRI/MSSS/Gerald Eichstädt /Seán Doran)

Another photo of Jupiter's northern hemisphere has been compared to Vincent van Gogh's iconic painting, "The Starry Night."

"The region seen here is somewhat chaotic and turbulent, given the various swirling cloud formations," NASA said in a June 25 blog post. "In general, the darker cloud material is deeper in Jupiter’s atmosphere, while bright cloud material is high. The bright clouds are most likely ammonia or ammonia and water, mixed with a sprinkling of unknown chemical ingredients."

The image shown above was taken on 1:23 a.m. EDT on May 24, as Juno was approximately 9,600 miles above Jupiter's clouds, above a northern latitude of 56 degrees. Gerald Eichstädt and Seán Doran created the image using data from the spacecraft’s JunoCam imager.