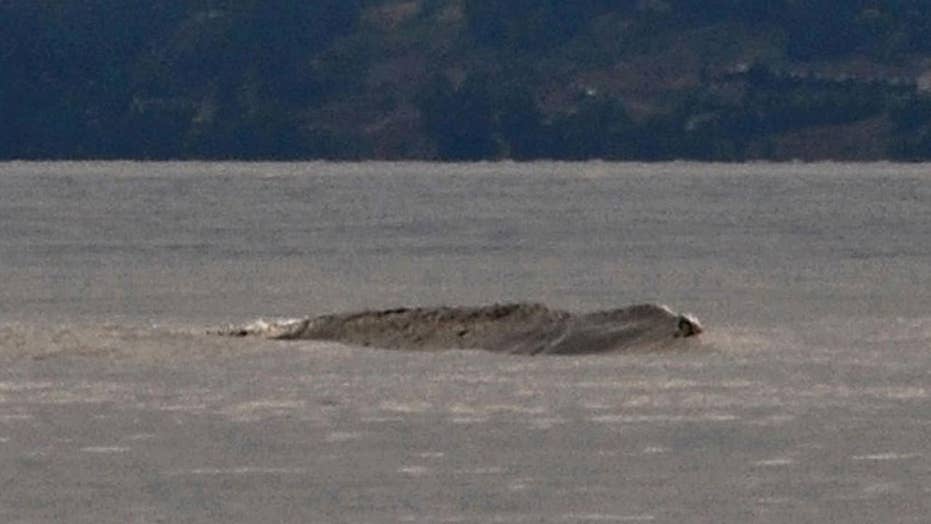 The Canadian version of the Loch Ness monster, the Ogopogo lake monster, has been captured on video. There have been three major sightings of the monster in the past month.

Until this month, it had been years since anybody claimed to have seen the legendary Ogopogo — Canada’s version of the Loch Ness monster.

In the past three weeks however, there have been three sightings of the giant serpent-like animal said to dwell in the enormous and deep Lake Okanagan in British Columbia.

On Sept. 12, David Halbauer, his brother Keith and their families were enjoying a picnic at one of Lake Okanagan’s many beaches when they saw something that left them awestruck.

“When you’re sitting by the beach on a sunny day, you don’t expect to see a dinosaur come out of the water,” David Halbauer told Global News.

“I saw this black form come out of the water — cylindrical — and then roll.”

The brothers likened the animal to a “giant snake” moving across the water and said it was about 15 meters (49 feet) long.

Since that encounter, there have been two more sightings of Ogopogo, generating plenty of excitement among locals and tourists alike.

Indian legend describes a monster that would rise from the depths when storms battered the lake, but the first documented sighting of Ogopogo was in 1972.

Multiple witness accounts describe a creature with a long undulating body, several humps and a head resembling a horse.

Bill Steciuk, who lives in the nearby city of Kelowna and runs a website dedicated to the legend of Ogopogo, said he’d been left stunned by the cluster of sightings.

“There haven’t been a lot of Ogopogo sightings lately, which is the problem,” he said. “Then all of a sudden you have three in three weeks — totally amazing.”

Mr. Steniuk’s obsession with Ogopogo began in 1978, when he came to a screeching halt while driving over the Lake Okanagan floating bridge after catching a glimpse of something in the waves.

“There’s three humps in the water and a head moving towards Kelowna,” Mr. Steciuk said. “Before that, I was not a believer.”

The experience prompted Mr. Steniuk to dedicate his life to hunting for Ogopogo and he has organized numerous expeditions on the lake over the years, finding nothing.

His luck changed in 2015 when he spotted a large snakelike head popping out of the water about 150 meters (490 feet) from shore. He quickly grabbed his camera and captured an image of an odd, round object breaking through the lake’s glassy surface. He is convinced it is a photo of Ogopogo.

Mr. Steciuk believes the lake may be home to dozens of the elusive serpents.

“The theory is, that eons ago, this lake was open to the ocean,” he said.

LAKE MONSTERS AROUND THE WORLD

The Dharruk people told European settlers of enormous water serpents known as Mirreeulla inhabiting the Hawkesbury River, north of Sydney. The creatures had long necks, large bodies and tails and were depicted in cave art. There have been hundreds of reported sightings in the past 140 years.

The first anyone heard of Champ was in 1873, when a railroad crew fled in panic after reportedly witnessing a serpent emerge from Lake Champlain. There have been more than 300 subsequent sightings.

The legend of the Memphre serpent has been around since the 19th century when Native Americans warned white settlers against swimming in the lake. There are now about eight sightings a year.

Rumors of the Lake Tianchi monster have been around for more than a century.

In July 2002, about 200 people claimed to have seen it while sightseeing in the Chennai mountains and, despite scientific skepticism, enthusiasts have started a society dedicated to tracing the creature.

Nahuelito is a lake monster reported to live in Nahuel Huapi Lake at the foot of the Patagonian mountains. Some say she is the result of nuclear experiments, others believe she may be one of the last members of an ancient dinosaur species such as a plesiosaur.

Stories of Nessie date back hundreds of years but the first modern sighting of the monster was in April 1933 when a couple staying at the lakeside Drumnadrochit Hotel reported a whale-sized creature rolling about on the surface of Loch Ness. The creature is now arguably the world’s most famous lake monster.