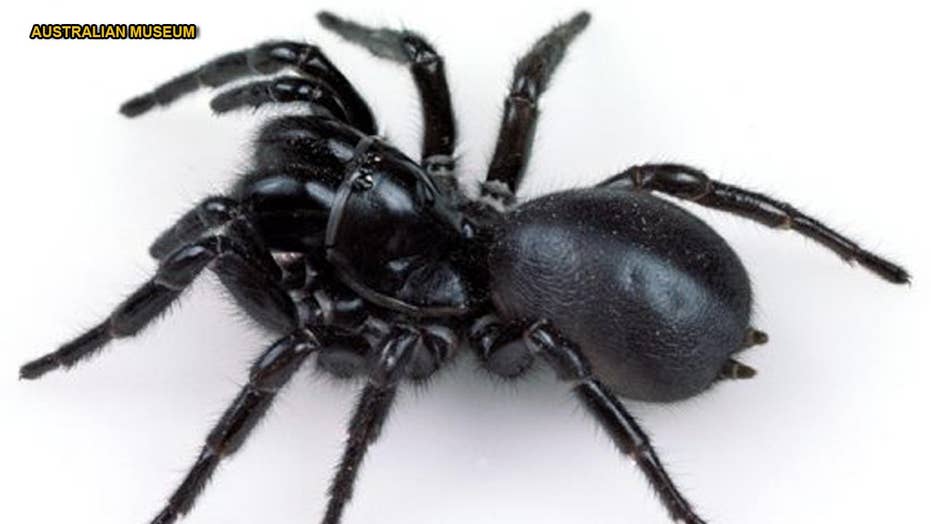 'World's deadliest spider' may help save its own victims

Australian funnel webs are renowned as the world’s deadliest spider. Now one of their own, Colossus, is being milked for his prodigious production of venom, which will be used to create life-saving antidotes against the bite of his own kind.

From a black widow found in store bought broccoli to a Tennessee woman who claims her apartment is infested with dozens of brown recluse spiders, these eight-legged creatures can be found just about anywhere.

Read on for a look at some of the most venomous spiders found in the United States and what symptoms appear if you’re bitten.

Known for the small, red hourglass shape on their abdomen, a black widow’s bite is 15 times more potent than a rattlesnake's, according to National Geographic.

In humans, “bites produce muscle aches, nausea, and a paralysis of the diaphragm that can make breathing difficult," according to the magazine. Black widow bites can be fatal for young children and the elderly.

According to the Center for Disease Control and Prevention (CDC), black widows are found across the U.S., though they are most common in the southern and western part of the country. You can find them in wood piles, on fences and under leaves, though they can also be found “living in outdoor toilets where flies are plentiful,” according to the CDC.

Similar to the black widow, brown recluse spiders also have a distinct marking. These spiders — which are typically found in the Midwest or South — have a “dark violin-shaped (or fiddle-shaped) marking on its head,” according to the CDC.

Brown recluse spiders are found in dry, sheltered areas, such as a under a log or rock. Inside homes, however, they typically hide in shoes, closets, attics or garages.

“The brown recluse spider cannot bite humans without some form of counter pressure, for example, through unintentional contact that traps the spider against the skin,” the CDC reported, adding that the bite marks typically appear as a “white blister” and can produce localized pain, a stinging sensation and lesions.

Fun fact: While most spiders have eight eyes, the brown recluse has six.

Yellow sac spiders, which are nocturnal, are found nearly everywhere in the U.S., according to the University of California, Davis. This spider is known for the “resting sac” it builds, commonly found “in the corners of walls and ceilings, or behind shelves and pictures,” according to the university, which also reported that “it may also been seen running on walls and ceilings at night, and may drop to the floor quickly on a silken thread if disturbed.”

Yellow sac spiders are commonly found indoors and are known to bite without first being provoked.

“Typical symptoms of a bite include an immediate stinging sensation followed by redness and mild swelling. Sometimes a blister may form at the site of the bite, often breaking, leaving a sore that heals over a period of several weeks,” according to the University of California, Davis.

That said, it’s important to note that this particular arachnid doesn’t inject its venom each time it bites, and is unable to pierce everyone's skin.

Native to southern Africa, this species of spider can be found in the United States in states such as Georgia, Florida, North Carolina, South Carolina, Texas, Hawaii and beyond, according to the University of Florida.

Like other arachnids, the brown widow spider can be found on wooden fences, in hollow trees and under building ledges, among other places.

Most brown widow spiders have an orange-colored hourglass shape on the abdomen.

In some cases, a brown widow bite can be more severe than that of a black widow. However, according to the University of Florida, these spiders are not particularly aggressive — roughly 15 percent of brown widow bites are venomless.

Symptoms of a brown widow bite can include muscle pain and cramps, abdominal pain, difficulty in walking and a fever, among other symptoms.