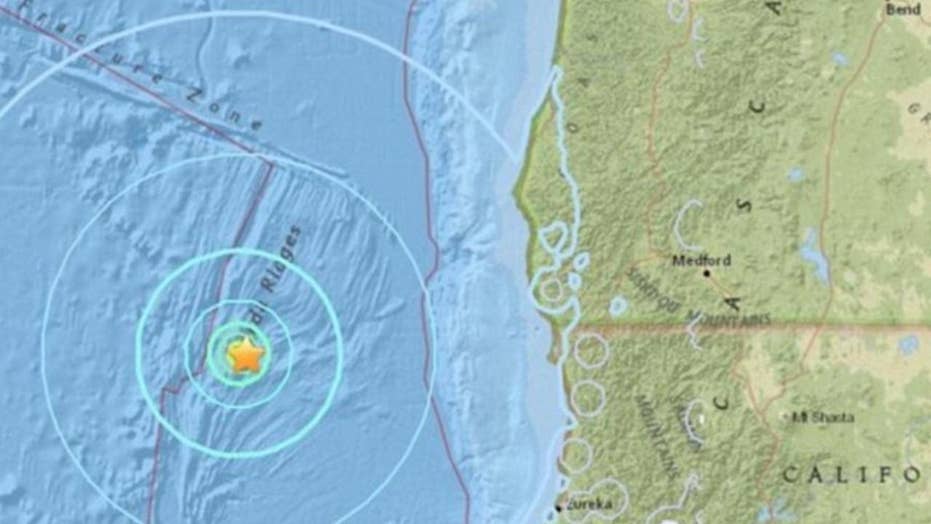 Earthquakes hit close to big fissure off California coast, sparks fears of 'The Big One'

A string of recent earthquakes off the West Coast of the U.S., ranging from 2.8 to 5.6 on the Richter scale, could help trigger the earthquake colloquially known as "the Big One."

The map provided by the U.S. Geological Survey highlights 11 recent earthquakes, all occurring on the seabed of the Juan de Fuca tectonic plate, approximately 6 miles below the surface. The plate, which is described as "small" by the Pacific Northwest Seismic Network (PNSN), is fairly active, moving east-northeast at approximately 1.6 inches per year.

To date, the USGS has not issued any warnings over this spate of earthquakes, given the fairly common nature of the caliber of quakes, Don Blakeman, a geophysicist at the National Earthquake Information Center told the Daily Mail.

Part of the concern surrounding the plate is that it is not a smooth motion, but rather a motion described as "sticky," causing strain to build up "until the fault breaks and a few meters of Juan De Fuca slips under North America in a big earthquake."

PNSN noted that it would take a lot of slip (approximately 10s of meters) over a very large area to generate a M9 (magnitude of 9.0) level earthquake that could hit the region, but
noted that it does occur approximately every 550 years on average.

The cause for concern is what happens when the Juan de Fuca plate eventually submerges under the much larger Pacific plate. For approximately 330 years, the plate has continuously been pushed down, an activity that will eventually lead it to be pushed under the North America plate, causing the region to sink six feet on the minimum and may result in one of the largest earthquakes in human history.

If the entire 650-mile long Cascadia Subduction Zone (which includes the Juan de Fuca plate) were to experience a full rupture, it could not only trigger a 9.0 earthquake, but a tsunami as well.

Recent studies have highlighted how vulnerable we are to the proverbial "Big One."

Last month, one study detailed that there is a 15- to 20-mile-long stretch of the San Andreas fault ‒ called the Durmid ladder structure ‒ that could result in an earthquake with a magnitude of 7 or greater.

"This newly identified Durmid ladder structure is a voluminous, right-reverse fault zone that broadens across Durmid Hill around rotating domains of regularly spaced, left- and right-lateral cross faults," a research article on the study reads.

The research put the odds at 75 percent that it would occur in both northern and southern California sometime over the next 30 years.

The "Big One" has been warned about several times before, with the USGS writing extensively on the topic, including how to use past earthquakes to better predict the future.