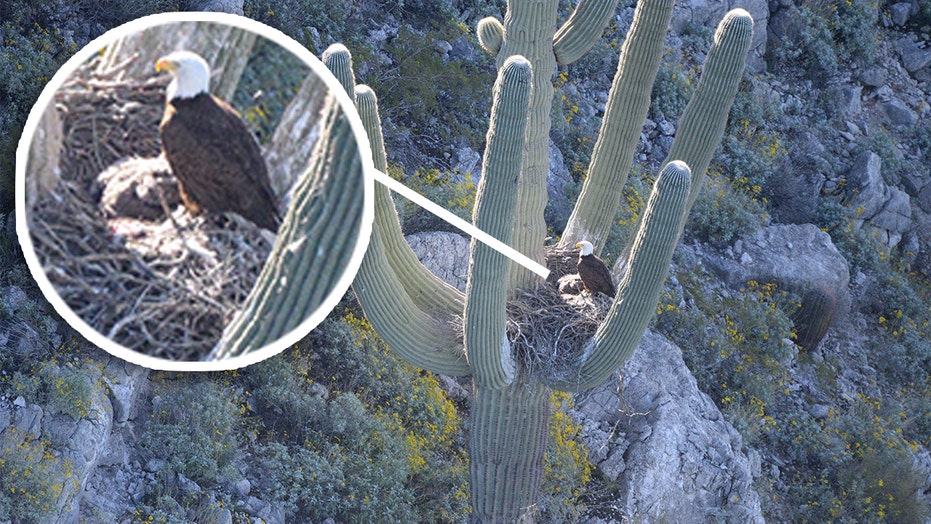 The Arizona Game and Fish Department shared what it said were the first known photos of bald eagles nesting within the arms of a saguaro cactus taken in the state.

“A rare sight,” the agency tweeted.

So rare that it marks the first time in decades that anyone had even reported seeing the country’s iconic bird nested in one of the state’s iconic cactuses.

The last time was in 1937, according to Kenneth “Tuk” Jacobson, the agency's coordinator of raptor management.

Kermit Lee of Lee's Trading Post had mentioned large nests in saguaros along the Verde River that were believed to belong to bald eagles -- but there were no photographs or other documentation.

A team of biologists out on a bald eagle surveying trip made the new find near a central Arizona reservoir, according to Jacobson.

He called the discovery “amazing.”

They were in danger of extinction 40 years ago due to habitat destruction, poaching and the contamination of their food supply with chemicals such as DDT, according to the Fish and Wildlife Service.

The conservation effort succeeded in bolstering the numbers, and in 2007 they were taken off the endangered species list -- although they are still classified as protected.

Bald eagles sometimes have multiple nests within their territories, mostly atop large trees, and those nests can weigh as much as half a ton, according to the Wildlife Service. They sometimes nest on cliffs or on the ground -- and, in rare cases, a cactus.

The saguaro cactuses themselves have been threatened recently, with thieves illegally digging them up to ship around the world.