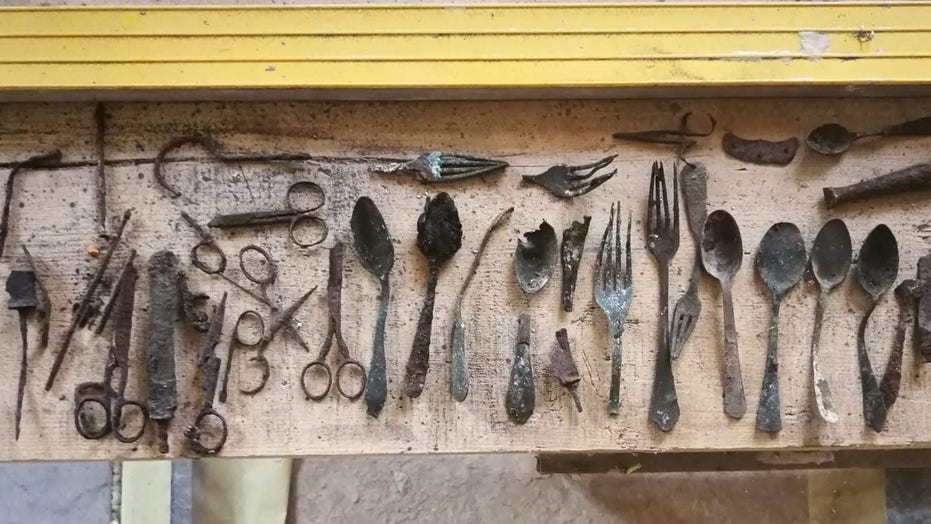 A number of items hidden by prisoners at Auschwitz have been recovered from a chimney at the site of the Nazi concentration camp in Poland.

The objects were found in Block 17 of the former Main Camp at Auschwitz as part of the renovation work undertaken by Austria’s National Fund for the victims of Nazism. The restoration work is in preparation for a new Austrian exhibition.

“A chimney flue was uncovered on the ground floor while measures were being undertaken to preserve original masonry,” the National Fund explained in a statement. “Hidden objects came to light beneath it, including knives, forks, hooks, scissors, pieces of leather, cobbler's tools and parts of shoes.”

It is not yet clear why the items were hidden. “In the absence of an in-depth analysis by historians and conservators, it is still too early to discuss how they were used and the possible intentions of the prisoners – conceivable examples include making and repairing clothes, locksmithing or to prepare for an escape,” explained the National Fund. “It is also possible that the scissors and cutlery were used to barter with other prisoners.”

Prisoners with special manual skills were housed in the building where the items were found, according to the National Fund. “Survivor testimonies indicate that there were a number of workshops in the cellar where, for example, baskets were woven,” it said.

The largest of the Nazi concentration camps and extermination centers used in the Holocaust, over 1.1. million men, women and children were killed at Auschwitz-Birkenau.

Austria’s National Fund for the victims of Nazism was set up in 1995. The fund “renders payments to victims of National Socialism, in particular to those who had previously received little or no compensation; to those in need of special assistance or those whose personal circumstances warrant relief,” it explains, on its website.

Discoveries such as the Auschwitz items offer a glimpse into the horrific events of World War II. Last year hundreds of chilling items were discovered at Nazi massacre sites in northwestern Germany. The finds were uncovered at three sites in the Arnsberg forest, where members of the Waffen-SS and German army massacred 208 Polish and Russian forced laborers in March 1945, just before the end of World War II.

In 2017, experts uncovered two ritual baths in the remains of the Great Synagogue of Vilnius, in Lithuania, more than 70 years after its destruction during the Holocaust.