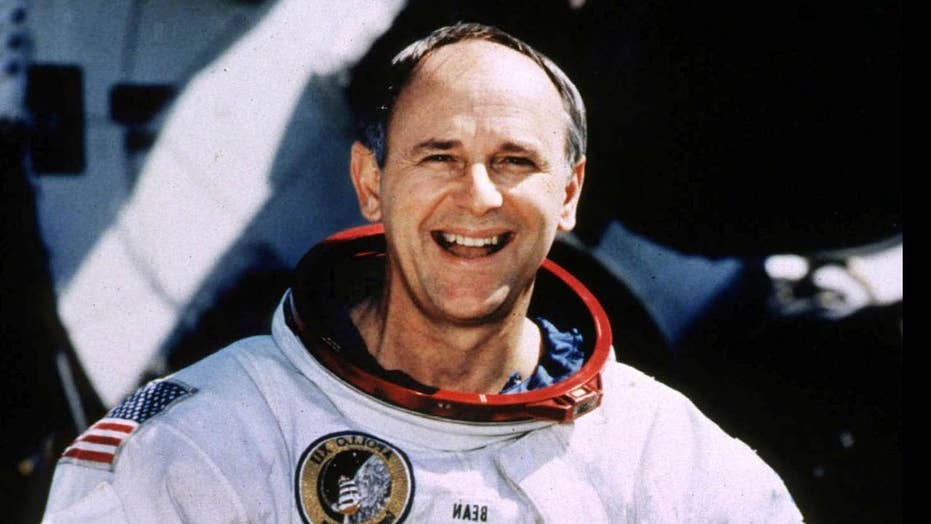 Alan Bean, fourth man to walk on moon, dies at 86

Astronaut Alan Bean, who was the fourth man to walk on the moon, and later worked to express the wonders of visiting another world through art, died Saturday. He was 86.

“Alan was the strongest and kindest man I ever knew. He was the love of my life and I miss him dearly,” said Leslie Bean, his wife of 40 years. “A native Texan, Alan died peacefully in Houston surrounded by those who loved him.”

"We're saddened by the passing of astronaut Alan Bean,” NASA said on Twitter. “The fourth person to walk on the Moon, he spent 10+ hours on the lunar surface during Apollo 12. Bean was spacecraft commander of Skylab Mission II & devoted his retirement to painting.”

Born March 15, 1932, in Wheeler, Texas, Bean received a bachelor of science degree in aeronautical engineering from the University of Texas in 1955, according to ABC13 in Houston. He attended the Navy Test Pilot School and accumulated more than 5,500 hours of flying time in 27 different types of aircraft.

Bean and Pete Conrad explored the lunar surface during the second moon landing in November 1969.

“They explored the lunar surface, deployed several lunar surface experiments and installed the first nuclear power generator station on the moon to provide the power source,” his NASA biography says. Richard Gordon, the third member of the mission, remained in orbit as the command module pilot.

As a painter, he dedicated his time to creating an artistic record of humanity’s first exploration of another world, his family said. His Apollo-themed paintings featured canvases textured with lunar boot prints, and were made using acrylics embedded with small pieces of his moon dust-stained mission patches.

“Alan Bean was the most extraordinary person I ever met,” said astronaut Mike Massimino, who flew on two space shuttle missions to service the Hubble Space Telescope. “He was a one of a kind combination of technical achievement as an astronaut and artistic achievement as a painter.”

In addition to his wife, Bean is survived by his sister, and by two children from a prior marriage.

"I feel blessed every day when I'm working on these paintings," he once said in describing his passion for his art, according to NPR. "The first artist to ever go to another world and try to tell stories that people care about."