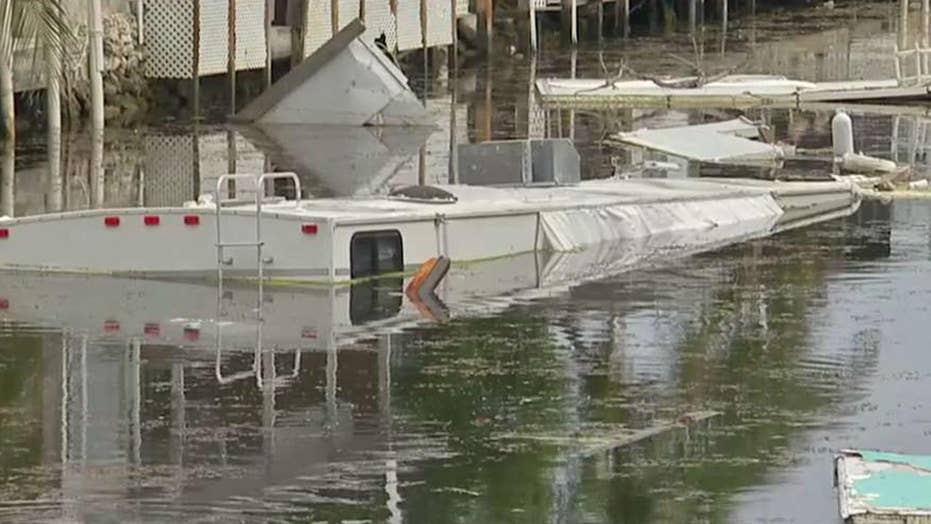 Experts expect a near normal Atlantic hurricane season as parts of Florida are still recovering from Hurricane Irma; Phil Keating reports from Marathon.

MARATHON, Fla. – Expect a near normal to slightly above normal 2018 hurricane season.

About 10 to 16 named tropical storms, five to nine of those becoming hurricanes, and one to four becoming powerful major hurricanes, categories 3, 4 and 5.

The National Oceanic and Atmospheric Administration, or NOAA, released its 2018 forecast from its Lakeland, Fla.

NOAA’s not expecting an El Nino summer, which produces wind shear that helps break up developing storms in the Atlantic and Caribbean, nor a La Nina climate pattern, which results in more active seasons. So, the forecast is for a hurricane season that’s about average.

In 2017, there were three devastating hurricanes: Harvey, which slammed and flooded southeast Texas; Irma, which whipped through the lower Florida Keys as a Category 4 and pushed up the state and Maria, which devastated Puerto Rico.

In the Florida Keys, in particular, there is serious concern—even fear—about another hurricane strike in the next few months. Irma debris is still clogging and littering many canals, destroyed homes still haven’t been demolished, hotels and businesses remain closed and, most importantly for local government leaders, their “rainy day funds” were depleted on Irma. The rainy day funds are now tapped out. And tens of millions of FEMA disaster reimbursement dollars have still not arrived.

"I really believe bureaucracy is showing its evil head,” laments Islamorada City Councilman Mike Forster. "We have submitted $6 million in FEMA reimbursement requests, and to date, we've not received a dime."

FEMA explains the time it takes to get the money is necessary to fully vet each submission, to avoid fraud, so the U.S. taxpayer doesn’t get fleeced.

FEMA administrator Brock Long told Fox News "recovery unfortunately is not something that occurs overnight. In many cases, the money that will come to the state and ultimately to the local level will be coming over years, and so the recovery process is a very long delivery process.”

At last week’s Governor’s Hurricane Conference in West Palm Beach, Long also bluntly warned all local and state governments not to depend on FEMA in the first few days of a hurricane strike, that they must have a plan and be prepared for the possibility of loss of power, cell phone service, roads washed out and stock up with food and water supplies for post-hurricane distribution centers.

Much of the bureaucratic headache, explains Islamorada’s Forster, is all the red tape.

Once the storm hits, the locals spend their limited funds for cleanup, then submit their reimbursement expenses to FEMA. In Florida, when FEMA approves the payout, it sends that money to the state’s Division of Emergency management, which is then charged with dispersing the dollars. And if the paperwork has any errors, even lacking an exact GPS coordinate of something destroyed, the paper chain continues to go back and forth while the money awaits.

Throughout the Keys, all of the tons and tons of debris on land—14,000 dump trucks worth—has been removed. But the canals and offshore, under the water so popular with snorkelers, scuba divers and sport fishermen, remain clogged with un-removed debris, an estimated 100,000 cubic yards of it.

But the canals around his neighborhood remain unnavigable.  And practically every homeowner here owns a boat, which is the reason they moved to the Keys in the first place.

“This requires, unfortunately, our government to help us, says Moser. “And FEMA has failed us.”

Despite that opinion, for its part, FEMA promises the money will come.

Everyone living along the Gulf and Atlantic coasts should start preparing. Below average or above average hurricane season, no matter. As the Florida Keys residents will tell you, it really does only take one to ruin your life.