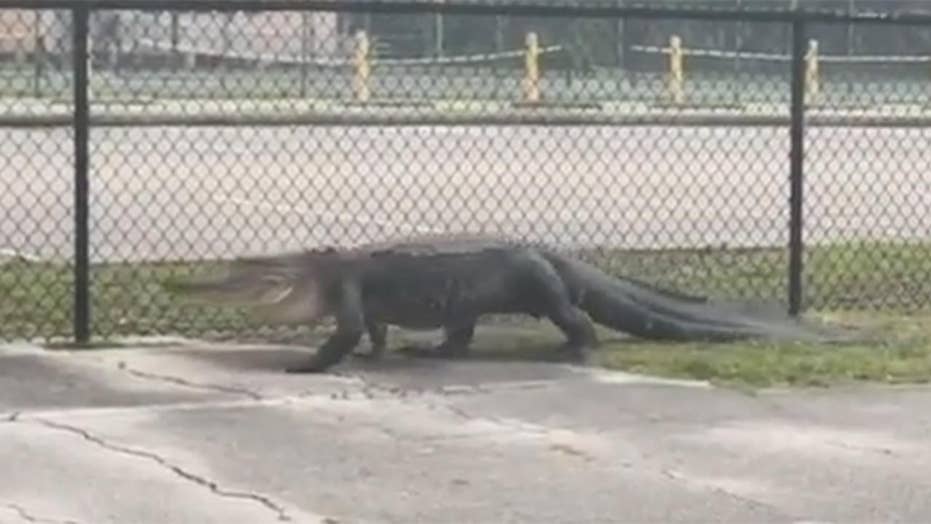 Stories about alligators are seemingly never lacking in Florida. Earlier this week, a gator was spotted swimming through a flooded roadway. Before that, wildlife officers in the state had trouble nabbing a gator when it bared its teeth and performed a so-called “death roll.” And in recent days, yet another story about a Florida gator has emerged… after one was caught on camera scaling a fence.

Florida resident Christina Stewart was quick to stop and film the odd event, which shows the gator clawing its way up the fence at the Naval Air Station in Jacksonville over the weekend. It eventually managed to get its lengthy body up and over, thudding down on the other side.

The gator was not removed from the base once it made it over, NAS Jacksonville officials told local news station WJAX-TV.

The Navy base later took to Facebook with a photo of what appears to be the same gator climbing over the fence.

“If you are new to Florida or have been here for years, when you see water, assume an alligator could be in it. We have several on the base and they don't respect our security measures,” officials wrote. “On the serious side, always be aware with small children and pets. Golfers be aware and watch where you stick your hands. Do not approach them ever!”

Alligators are “good climbers,” states a fact sheet about alligator safety from the University of Florida.

“If you want to keep alligators out of your yard, install a fence that is at least four and a half feet tall,” it recommends, noting “anything lower would not be adequate protection.”

It’s not clear how tall the fence is at the NAS Jacksonville.

Tree climbing, specifically, is a “surprisingly common” trait in both alligators and crocodiles, National Geographic reported in 2014.

“Even without any special anatomic adaptations for gripping branches, crocodiles often make their way up trees, sometimes going as high as the crown and out onto large limbs,” the publication states.

In 2016, a gator in southwest Florida was spotted in a tree.