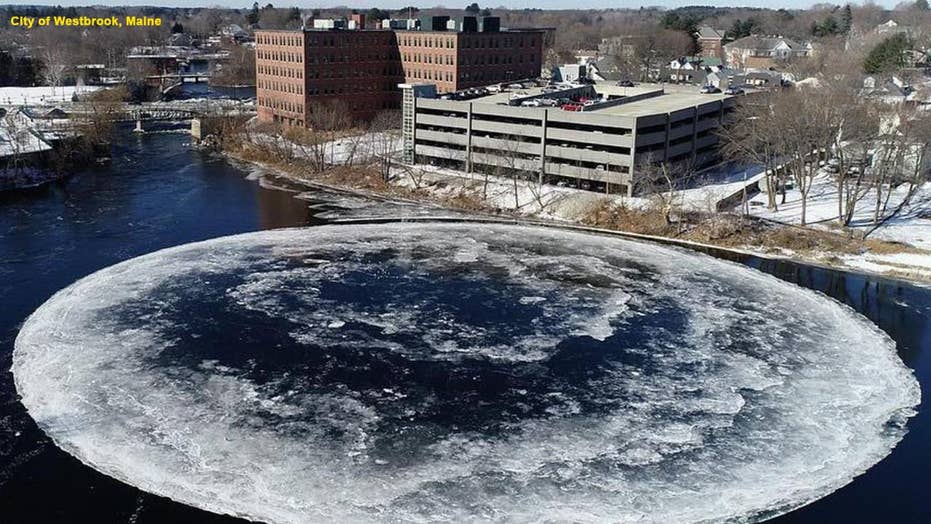 The city of Westbrook, Maine took a picture of a massive ice circle that formed on the Presumpscot River, an image that looks out of this world.

A colossal disk of ice that looked like something out of this world formed on a river in Maine earlier this week.

The city of Westbrook, Maine shared amazing images on Monday of a giant frozen disk that formed on the Presumpscot River.

According to the Press Herald, a web developer whose company has an office overlooking the river where the disk formed estimates the disk as being 300 feet in diameter and rotating counterclockwise.

"It kind of looks like a crop circle," Doug Bertlesman, the web developer, told the Press Herald. "It's pretty wild to look at."

The photos show the ice disk seems to be larger than a nearby, multistory parking garage.

Matt Battle, an associate professor of physics at Bowdoin College in Brunswick, told the local newspaper that he's never seen anything like it.

“It’s definitely not being caused by the Coriolis force (that objects experience because of the Earth’s rotation),” Battle told the Press Herald. “It looks marvelous. It’s a beautiful thing.”

The city's marketing and communications manager, Tina Radel, told Gizmodo that the ice disk "does not appear to be going up or downstream at this time," adding that "it could get bigger as more ice forms."

The city also posted a drone video of the ice disk on its Facebook page.

Locals had a range of responses to the huge rotating disk on social media.

“It’s where the aliens landed,” commented another.

Rob Mitchell, who owns the building where Bertlesman’s company is based, told the Press Herald that he notified the city about the disk on Monday morning.

“There were ducks sitting on it. The ducks were rotating on this big Lazy Susan," he said. "It was a big duck-go-round.”