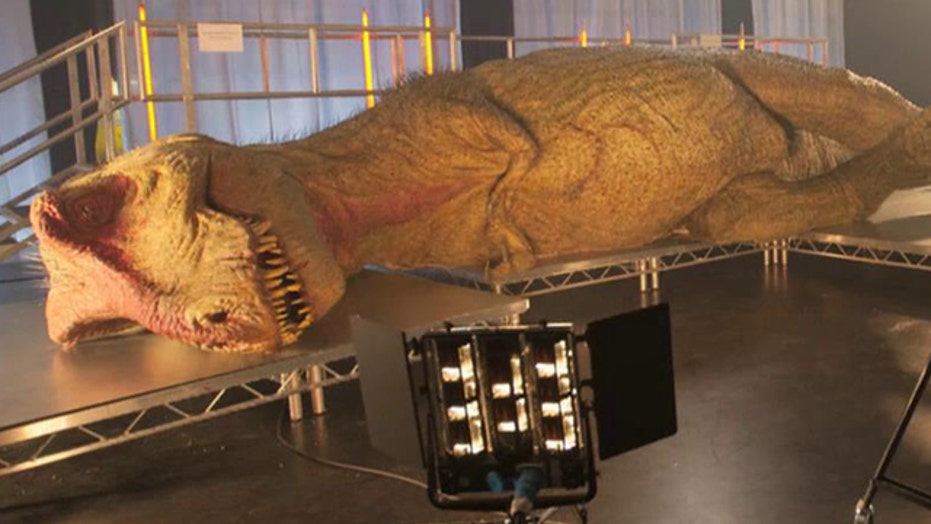 With “Jurassic World” hitting theaters next weekend, it seems like everyone’s got “dino fever” these days. This includes the folks at the National Geographic Channel, who are cashing in on the craze Sunday night with “T. rex Autopsy,” which features a dissection of the world’s first anatomically correct synthetic Tyrannosaurus Rex. Performing the autopsy are a veterinary surgeon and three leading paleontologists, including University of Edinburgh Chancellor’s Fellow Stephen Brusatte.

“I've been studying T. rex for a decade, but all we really have to go by are bones,” Brusatte told FoxNews.com. “Up until now, my mental image of T. rex has been that of a skeleton, of the bones I study. Now my image is of the incredible model that we built for the program.”

“I think the life-sized model that we built for the show is the single most realistic and accurate dinosaur that has ever been assembled,” he said. “It is based on everything we know about T. rex from fossils, with the unknowns filled in by reasonable inference to living crocs (close dinosaur cousins) and birds (living dinosaurs).”

The team used latex rubber, polyurethane foam, silicone rubber, polystyrene, and glass reinforced plastic to create the model, along with 34 gallons of fake blood. They had to get a bit more creative when it came to some of the other details. For example, the feces were made from oatmeal, coffee, and synthetic “badger poo.” In total, it took 1,000 man–hours for the effects house to complete the project.

The four participants weren’t allowed to see the finished product until cameras were rolling at Pinewood Studios in London. Brusatte said that their shocked reactions were completely genuine.

“I consulted on the model-making process, but I never actually saw the physical model as it was being constructed,” he recalled. “There was a fog machine, and the door opened and we walked through the fog to go face–to–face with this life–sized T. rex corpse. I was speechless. The model is beautiful, accurate, and really nails what I think T. rex looked like in the flesh.”

Once over the initial shock, the four had to figure out the synthetic creature’s age, sex and cause of death. For the dissection, they were given a variety of instruments, including a chainsaw. This came in handy when a leg had to be removed to figure out the dino’s age. Fun fact — like a tree, the age of a tyrannosaur can be told from the rings in its bones.

Later, the team had to slice open the belly and through the rib cage to get to the innards inside — a bloody, smelly, and (according to Brusatte) fun process.

“I would have to say my favorite part was when I was literally able to crawl into the belly of the beast and help remove some of the organs, and then poke around to try to figure out whether it was a boy or girl dinosaur. A ‘he rex’ or a ‘she rex,’ ” he said. “Being inside the belly really drove home how enormous T. rex was.”

While performing an autopsy on a life-like synthetic Tyrannosaur makes for entertaining and informative television for the viewers at home, what can the researchers get out of it themselves in terms of their research? Can these kinds of autopsies help scientists gain knowledge about dinosaurs in any way?

“Not really,” Brusatte said, but added that this wasn’t the point of the project.

“I've spent years of my life studying bones — observing, measuring, photographing, [and] describing them,” he explained. “Bones tell you a lot, but there can be a disconnect between bones and a living animal. Taking part in “T. rex Autopsy,” and cutting up the life-sized model, helped me visualize how a real T. rex all fit together– not only the bones, but the muscles, skin, feathers, internal organs.

“The gut was a little bigger than I thought, the teeth even more menacing on a fleshed-out skull, the internal organs much more massive than I imagined before. I will carry this image with me forever,” he added.

So, while moviegoers will no doubt turn out in droves for “Jurassic World” on Friday, discerning viewers who prefer their fake dinosaurs life-sized and scientifically accurate over CGI cartoons may want to tune in to the National Geographic special Sunday night.

“We'll never be able to observe a real T. rex, or ever bring one back through DNA cloning, so I think this model is the closest we're ever going to get,” Brusatte said. “And it's great.”