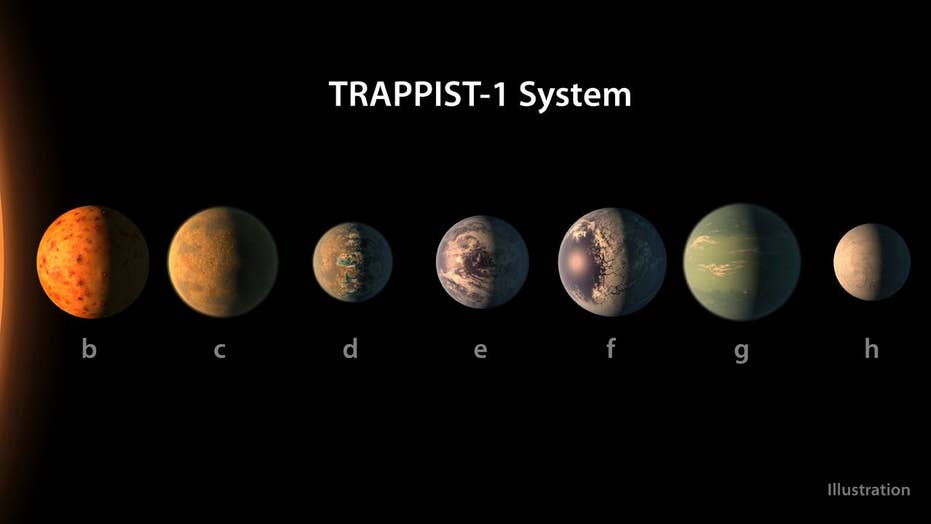 Three of the planets are located within the habitable zone

Talk about lucky number seven. Astronomers have discovered not one, not two, but seven Earth-sized planets orbiting a star called TRAPPIST-1.

What’s more, three of them are in the habitable zone— the happy place where liquid water can exist on the surface of rocky planets, as it’s not too hot or cold. (Although liquid water could potentially exist on any of the seven, NASA said, it likes the odds on those three best.) The space agency calls the discovery of the fascinating solar system record-breaking.

“The discovery gives us a hint that finding a second Earth is not just a matter of if, but when,” Thomas Zurbuchen, associate administrator of the Science Mission Directorate at NASA Headquarters, said at a news conference announcing the discovery.

Zurbuchen called it a "major step forward" towards the goal of answering the very big question: Is there life on other worlds?

The discovery "is very promising for the search for life beyond our solar system,” Michael Gillon, astronomer at the University of Liege in Belgium, added during the press conference.

This is the first time astronomers have found so many Earth-sized planets circling the same sun.

Since the seven planets orbit the star-- which is roughly 40 light years away-- fairly close to each other, the view from one planet would reveal other planets to look as big, if not bigger, than the way we see the moon from Earth.

“If you were on the surface of one of these planets, you would have a wonderful view [of] the other planets,” Gillon said, adding that they would be much more than just "dots of light" in the sky, as we see other planets, like Venus, from our home planet.

NASA IDENTIFIES 1,284 NEW EXOPLANETS, MOST EVER ANNOUNCED AT ONCE

The three planets in the habitable zone, also known as the Goldilocks Zone, are called TRAPPIST-1e, f, and g. Exoplanet “e” is about the same size as Earth and even gets around the same amount of star light as we do.

Scientists already knew of thousands of planets beyond our own solar system.

All told, the tally of confirmed exoplanets stood at 3,449 on Wednesday. But only a small number of discovered exoplanets meet the criteria for being possible Earths-- Earth-sized planets that are not too big, and in the habitable zone of a star.

While this discovery was made using the Spitzer Space Telescope, one of the most important instruments in the search for other planets is the Kepler Space Telescope, which is credited with 2,331 confirmed exoplanet discoveries. It uses a technique called the transit method, watching for a star to dim when a planet passes in front of the distant sun. About 74 percent of known exoplanets have been discovered using that method, according to NASA.

Earlier this month, astronomers announced that they had evidence of perhaps as many as 114 new exoplanets; the data they used to find those came from Hawaii’s Keck Observatory, which made observations of over 1,600 stars for over two decades. One of those newly-discovered planets that has garnered attention is a hot, rocky “super Earth” called Gliese 411b.

Scientists have even discovered a planet orbiting the closest star to Earth, aside from the sun. Called Proxima b, that planet is somewhat larger than our own planet and lies about four light years away— close by cosmic standards but still incredibly far away from a human perspective. (One light year— the distance light can travel in one Earth year— equals almost 6 trillion miles.) The important Proxima b discovery was announced last August.