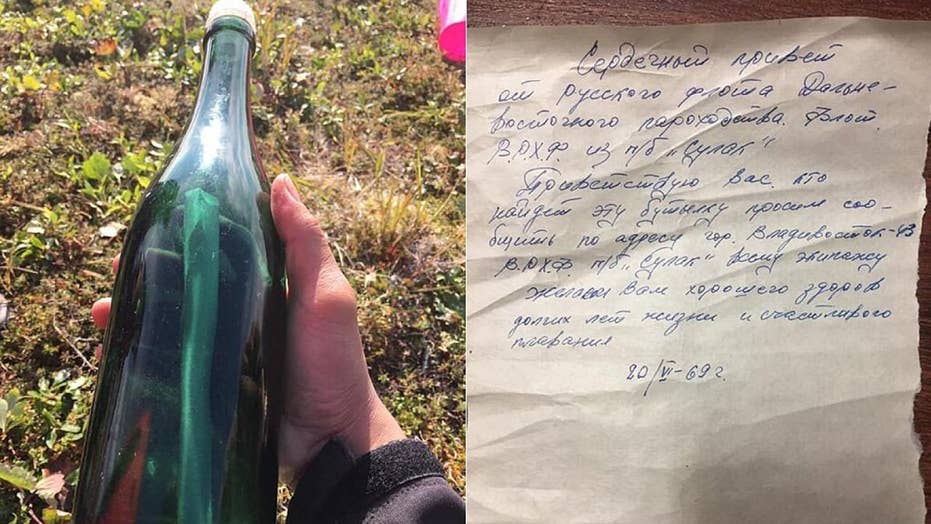 A message in a bottle, cast into the ocean by a fishing boat, has washed ashore on an Alaskan Island after 50-years.

A message in a bottle that was cast into the ocean from a Soviet ship 50 years ago has washed ashore on a remote Alaskan island.

The bottle was found by Tyler Ivanoff near Shishmaref, on Sarichef Island. He posted about it on Facebook on Aug. 5. “Any friends that are Russian translators out there?” he asked.

WORLD'S OLDEST MESSAGE IN A BOTTLE DISCOVERED ON AUSTRALIAN BEACH

One commenter explained that the message is from the Sulak, a Soviet-era vessel from the Russian port of Vladivostok.

The message in a bottle was thrown into the ocean from a Soviet ship 50 years ago. (Tyler Ivanoff)

“Warmest regards from the crew of fishing boat Sulak, Far East Shipping Company,” the commenter translated. The crew also asked whoever found the message to contact them. They ended the note by writing “wishing you a good health, long life and happy sailing.”

FLORIDA WOMAN DISCOVERS DEVASTATING STORY BEHIND MESSAGE IN A BOTTLE

The Moscow Times reports that the Sulak appears to be a Russian cargo ship that was built in Japan in 1966. Based in Vladivostok, the ship was withdrawn in 1992.

Last year, the world’s oldest message in a bottle was discovered on a beach in Western Australia, almost 132 years after it was thrown into the ocean.