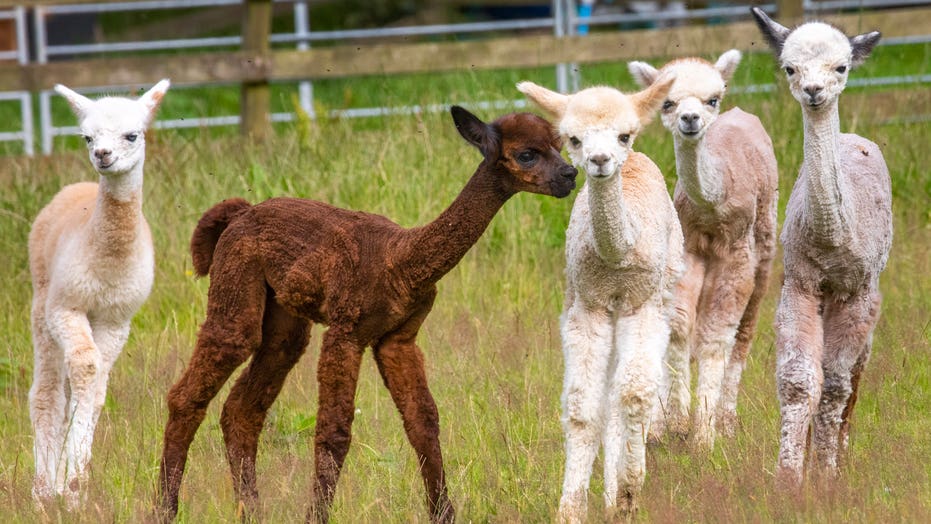 The majority of the world has been locked down during the coronavirus pandemic, but a set of alpacas was "unpacked" recently in the U.K.

The five alpacas, known as Mr. Softee, Casey, Sahara Foncé, Qilaut and Akoya, were all born within the past few weeks, according to British news agency SWNS. Mr. Softee, the youngest, was born on July 19, while Casey, the oldest, was born on May 29.

"It's an exciting time of year — vets call it 'unpacking,'" one of the alpaca's owners, Stuart Ramsay, told the news outlet. "When you go to the vet they will say, 'Has she unpacked yet?'"

Newborn Mr. Softee was only born on July 19, and the oldest of the five babies is Casey, born on May 29. Dark brown Sahara Foncé is expected to become a prize-winner at shows when she competes, as is fawn-colored Akoya when he goes into the ring. (Credit: SWNS)

RED SQUIRREL LAUNCHES ITSELF AT GREY SQUIRREL IN VIRAL PHOTO

Two of the alpacas, including Sahara Foncé (brown) and Akoya (fawn-colored) are expected to compete in shows, largely due to their exotic coloring, Ramsay and his wife, Jean McDonald, added.

The miniature mammals weigh between 18 and 20 pounds each, which Ramsay said is a "good weight for a healthy alpaca."

Including the new alpacas, Ramsay and McDonald have 37 of the woolly mammals at their farm, Velvet Hall Alpacas, in Innerleithen, Scottish Borders.

The owners will shear the alpacas and sell their wool, while also making their own garments, including hats or scarves.

"Sahara is absolutely lovely, I think she will end up being one of the favorites," Ramsay explained.

For now, Ramsay said he and Jean enjoy watching the alpacas interact with one another, away from predators.

"They are quiet, because they are preyed on in the wild," he explained. "They can be a little bit shy, they don't like it if there's a lot of movement and people being a bit hyper. They are good fun."

Alpacas are native to South America, but have been in the U.K. since the 1980s. There are approximately 14,000 of them in the country, according to Alpaca Seller, which added they can cost from $650 (500 pounds) for a young male to more than $2,500 for a female of breeding age.