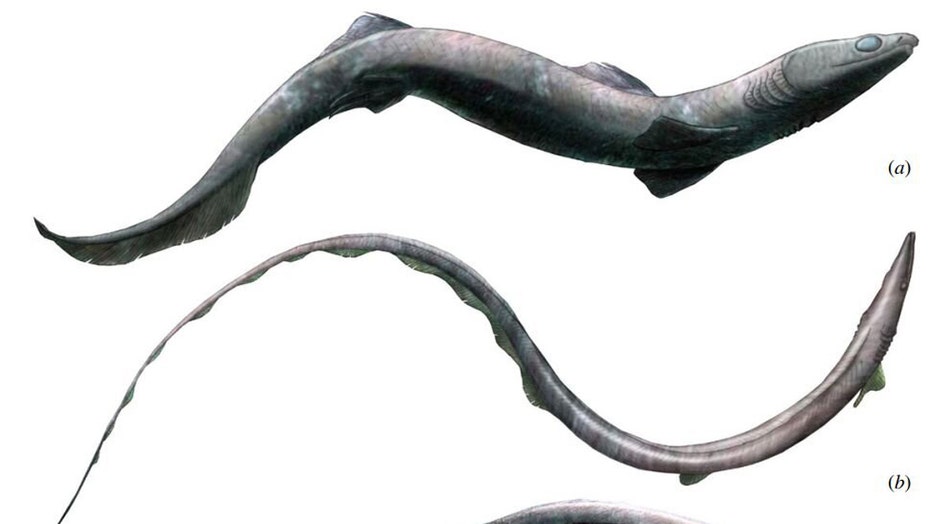 The complete fossilized skeleton of a shark that existed 370 million years ago has been discovered for the first time, a find researchers say is "unprecedented."

Known as Phoebodus, the fossilized remains of the ancient shark were discovered in the Anti-Atlas Mountains in Morocco. Shark teeth, including those of Phoebodus, are among the most common fossils discovered on the planet. But because their bodies are primarily made of cartilage, a complete skeleton has never been found, until recently.

WHAT IF THERE WERE NO SHARKS?

The researchers added that Phoebodus may be similar to the modern-day frilled shark, given its elongated eel-like body and large snout.

"Among pre-Carboniferous jawed vertebrates, the anguilliform body shape of Phoebodus is unprecedented, and its specialized anatomy is, in several respects, most easily compared with the modern frilled shark Chlamydoselachus," the abstract added.

The researchers tested the fossilized remains and found that they were approximately 370 million years old, according to a statement announcing the findings. Prior to the skeleton, the only known evidence of Phoebodus was three teeth.

Although the two sharks are only loosely related, it's their teeth, along with their bodies, that increase their similarities.

“The frilled shark is a specialized predator, with the ability to suddenly burst forward to catch its prey,” David Ebert, a modern shark expert at the Pacific Shark Research Center, told National Geographic. “The inward-pointing teeth then help to make sure the prey can only go one way: into its throat. Maybe Phoebodus did something similar.”

The research has been published in the scientific journal Proceedings of the Royal Society B.