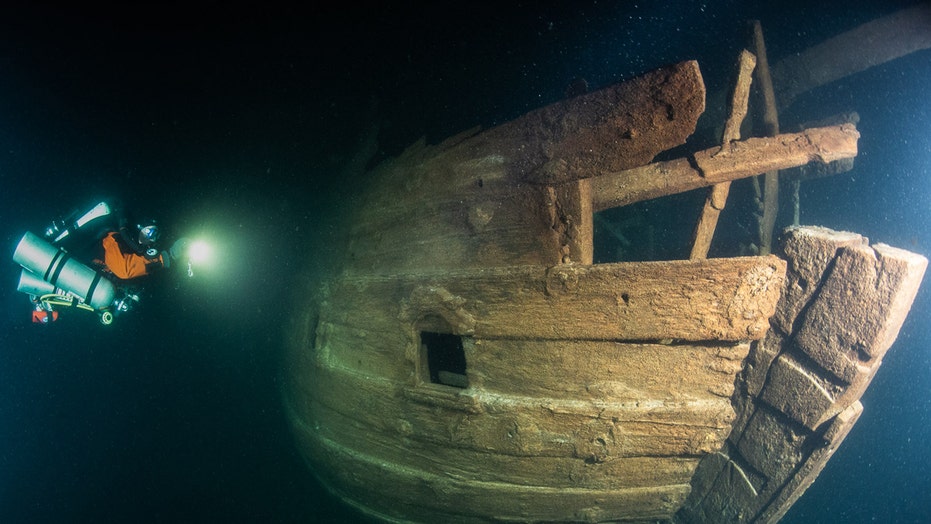 Divers in the Baltic have discovered the well-preserved wreck of a 17th-century Dutch merchant ship.

The Finnish Badewanne diving team was searching for first and second world war wrecks at the mouth of the Gulf of Finland when they made the discovery.

“It was to our great surprise when descending on a wreck at 85 meters [279 feet] depth, expecting to see an early WW1 minesweeper or a schooner sunk during WW2, we realized that we are looking at an almost completely preserved Dutch Fluit ship!” Badewanne explained, in a statement. “She rests on even keel on the seabed, with most of her rigging scattered around her.”

Fluit, or Fluyt ships are specially-designed cargo vessels that emerged in the 17th century.

The wreck was discovered at the mouth of the Gulf of Finland. (Badewanne.fi)

Images of the ship show that much of the wreck is still intact. “It is only in rare places around the world, including the Baltic Sea, where wooden wrecks can survive for centuries without being destroyed by chemical, biochemical and biological decaying processes,” said Badewanne. “Due to low salinity, absolute darkness, and very low temperatures all year round these processes are very slow in the Baltic.”

Other Baltic shipwrecks have also been revealing their secrets. Last year, for example, Maritime archaeologists used underwater drones to reveal the remains of an incredibly well-preserved 500-year-old shipwreck in the Baltic Sea.

Dating back to the late 15th century or early 16th century, the mysterious ship was first spotted by the Swedish Maritime Administration (SMA) in 2009. In 2019, a closer analysis of the wreck was done by maritime survey specialists MMT, who were amazed by its level of preservation.

Many parts of the wreck are intact. (Badewanne.fi)

Elsewhere in the Baltic, a ship that was sunk while transporting a cargo of liquor to the last Russian Czar is revealing its boozy treasure.

A view of the main cabin in the ship's stern. (Badewanne.fi)

The wreck, which was damaged by fishing nets, was discovered in 1999. Last year exploration specialists Ocean X Team and iXplorer salvaged a haul of cognac and liquor from the ship.