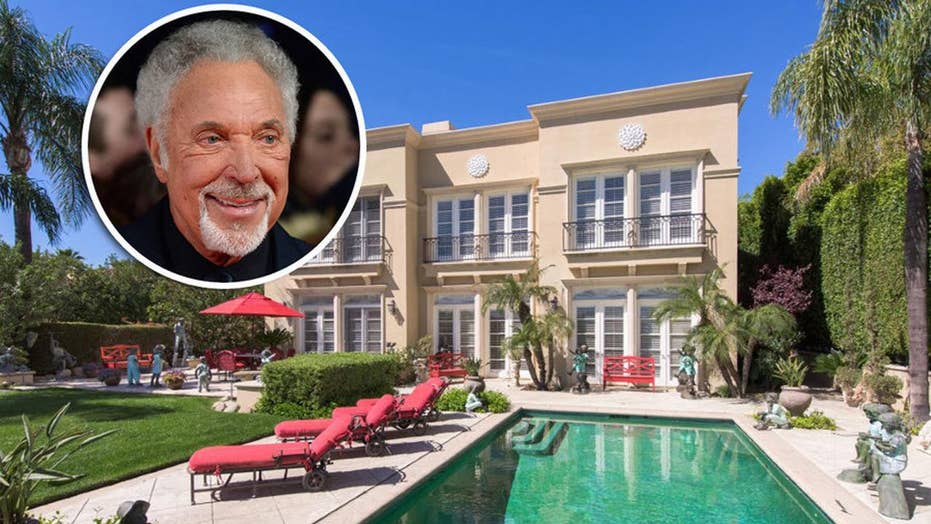 Sir Tom Jones has recently put his stunning Beverly Hills home on the market for a cool $8 million. Though Jones may hail from the U.K., he’s lived in Los Angeles for 20 years.

The five-bedroom, seven-bathroom mansion spans over 8,000 square feet and is located in the highly sought-after gated community of Mulholland Estates. The peach-painted home sits on over a half-acre of land.

Jones’ mansion includes a grand curved staircase, a wood-paneled library and a living room with a fireplace that opens onto a covered loggia with seating for al fresco dining, an entertainment room with a drop down movie screen, and a wet bar. Outside, there’s a pool and spa area.

HOW MUCH IS CELINE DION'S GORGEOUS FLORIDA HOME?

The large master suite has its own sitting room, his and hers bathrooms, steam showers and a sauna.

The “What’s New Pussycat?” crooner has also included plenty of feline touches including leopard print carpets throughout the home, leopard print lampshades, chairs and even big cat paintings. Yet another quirky design feature? The home has a gilded four-post bed.

Not into super posh palaces? Perhaps funky Northern California living is more your style. This former brewery-turned mixed used space is in the heart of San Francisco’s trendy Mission District.

“The neighborhood is highly walkable,” says property listing agent Wendy Storch. “A major urban shopping center at 16th and Potrero offers groceries, a gym, post office, office supplies, and a Peet’s Coffee. The museum district at 3rd and Howard is nearby, and the ballpark is not far.”

The historic building, which just hit the market for $4.5 million, was an active brewery from 1874 until 1912. Since the 1960s however, it’s housed artist studios and private residences.

The ground floor features about 1,500 square of work space while the three levels above boast over 3,300 square feet of residential space.

The property has four bedrooms, two bathrooms and a rooftop terrace with a 360- degree view of the city.

Many of the building’s original features have been preserved during restoration, including exposed cobblestones from the brewery, timber and brick walls, plus the original front doors.

The current owners have added their own artistic touches, too, like custom light fixtures fashioned from two-by-fours used in the building renovation.

Inside, the apartment features a professionally equipped chef’s kitchen with zebrawood custom cabinetry, a massive island, a six-burner Wolf Range, and a large pantry.

All bathrooms have spa-like, extra deep tubs and dual sinks.

And the whole apartment is just perfect entertaining with an open living room space that can accommodate dozens of guests.  The space is also fully wired for surround sound with sub-woofer, plus the space is big enoug hto accommodate a grand piano, chamber music ensemble, performance event or dance party, says Storch.

Finally, if you’re a fan of Disney’s iconic Cinderella Castle, there’s a French chateau for sale that looks like an exact replica of the fairy tale palace.

But this grand property was built in 1826, decades before the Magic Kingdom came to be in Orlando, Fla. in 1971.

The castle in the Nouvelle-Aquitaine region of southwest France was originally built for a wedding. In the past it was used as a luxury hotel but today the entire 7,700 hundred square foot building is empty—and the whole property can be yours for just $2.1 million.

The grounds are spread over 40 acres and include parkland, woodland, a kitchen garden, outbuildings, stables and servants quarters.

There’s a small pond in front of the chataeu and there’s even a fort dating back to the Middle Ages.

“Each of the rooms of the south-facing chateau looks out through mullioned windows over the grounds and the rolling hillside to the distance,” says sales agent Megan Lear of John D. Wood & Co. in London.

The lavish property would be perfect for an owner who loves to entertain.

“The buyer could easily be a business person wishing to take advantage of this one-of-a-kind property as a high-end boutique hotel or a wedding and events venue,” Lear said. “However, it could also be the perfect move for a family who want to enjoy a property very much like a Disney castle for themselves.