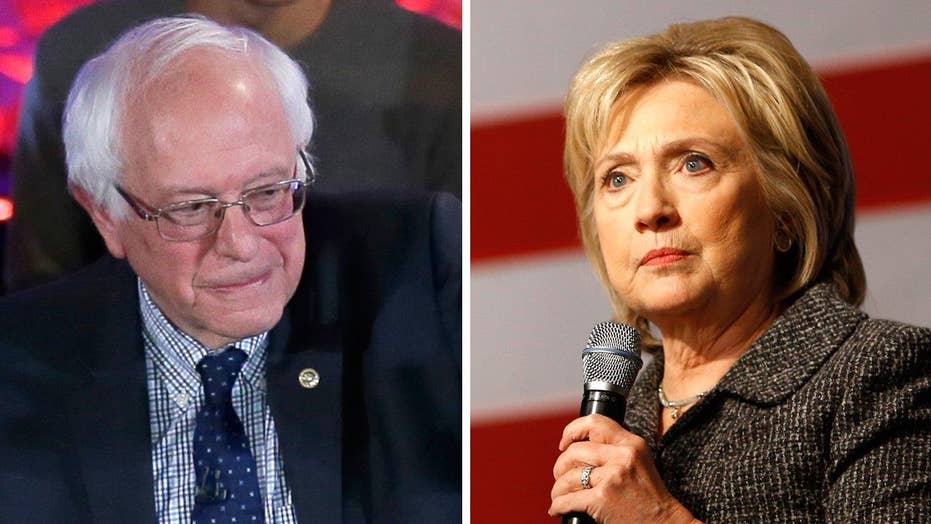 Clinton continues to lose ground to Sanders in Iowa, NH

Once again, a Democratic debate is being held on the weekend, and this one could have a slimmer audience than usual -- coming on the same day as two NFL playoff games, not to mention "Downton Abbey."

The Sunday night debate in South Carolina, hosted by NBC News, is the latest in a series of weekend Democratic bouts. The timing has fueled allegations from Hillary Clinton's rivals that party leaders are working behind the scenes to minimize her exposure.

This Sunday's debate is in a particularly rough slot -- forcing NFL fans and period drama lovers to choose between politics and pastimes.

On the same day Clinton, former Maryland Gov. Martin O’Malley and Vermont Sen. Bernie Sanders discuss health care reform and the Trans-Pacific Partnership, there are two NFL playoff games, with the second --  Pittsburgh Steelers versus the Denver Broncos – likely to finish only just before the debate begins.

And by the way, fans of PBS’ hit period drama “Downton Abbey” are faced with a much starker choice, as the debate and “Downton” begin at the same time.

Anglophiles without DVR must decide: either find out if Anna and Mr. Bates are successful in their quest to have a baby, or if Bernie Sanders has tweaked his position on gun control.

The dilemma is another arrow in the quiver for Clinton’s Democratic foes leveling a much more serious charge – that the DNC is deliberately placing the debates in ratings death zones in order to shield Clinton from high-profile appearance that may weaken her position as frontrunner.

In December, Sanders told WMUR “I think there is a desire on the part of the leadership of the DNC to protect Secretary Clinton” and pointed to the Nov. 14 debate, held in Iowa on the same day as a big college football game.

O’Malley has also accused the DNC’s debate process of being rigged in favor of Clinton.

“Only four debates … before voters in our earliest states make their decision,” O’Malley said at the Democratic National Committee’s summer meeting in Minneapolis in August. “This sort of rigged process has never been attempted before.”

Democrats have six sanctioned 2016 debates, compared with 11 for Republicans. Half are on weekends.

“They keep scheduling the Democratic debates at like 2 a.m. on Alaska PBS,” GOP presidential candidate Texas Sen. Ted Cruz said at a rally in December. “It’s almost like they don’t want anybody to see their candidates for president.”